Wilmington, NC’s Tamashii restaurant is among a growing number of sushi restaurants across the country to offer a sustainable seafood menu. Tamashii, which means ‘soul’ in Japanese, is striving to teach locals the merits of making sustainable seafood choices, says co-owner, chef, and self-proclaimed “sushi snob” Mark Scharaga. “As a chef, there is some education you have to do. People don’t know what sustainable means. They don’t realize there is a lot that is labeled incorrectly or not managed properly and a lot of misinformation out there.”

Scharaga had his own sustainability ‘ah-ha’ moment after working under other chefs whose sourcing practices were not in line with his values. “Their bottom line was always making money any way they possibly can, sourcing whatever.  They didn’t care,” says Scharaga. “I always felt like I was sacrificing my principles in doing that, and my goal when opening this restaurant was not to do that.  I wanted to be proud of everything we have in our sushi case, and I am.” 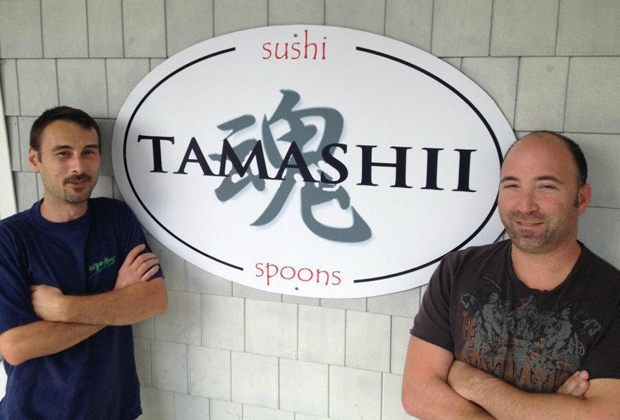 Co-owner Jonathan White and Scharaga chose to follow the guidelines of the Monterey Bay Aquarium’s Seafood Watch program.  Seafood Watch ranks fish options by color, with green indicating the best choices, yellow moderate, and red the fish to avoid.  Tamashii admits that following these guidelines can be complicated, and there are limitations.  For example, the East Coast has anywhere from 10-20 different species of flounder, making it difficult to know exactly where each fish is coming from.  “We are doing our best to find everything that is hook-and-line caught,” notes Scharaga, who is straight-forward about the challenges they face in sourcing sustainably caught and managed seafood.

Scharaga would like to serve primarily locally-caught seafood as well, but finding hook-and-line caught fish means looking beyond North Carolina waters at times. Such is the case with their Albacore tuna, which comes from Washington state.  Salmon, a sushi staple, can present a challenge, too.  Most of Tamashii’s salmon is hook-and-line caught, but to meet his restaurant’s demand, Scharaga has to purchase some salmon that is net caught.

In the future, he is considering placing limitations on how often they serve certain fish—for instance, serving tuna only on weekends.  “We are serving hook-caught tuna as opposed to long line because tuna populations aren’t what they used to be.”

One item you won’t find on the menu is eel or unagi.  “Unagi is not sustainable.  What they do is go out and capture eggs and larvae and raise them for food.  But they never make it back out into wild to repopulate them.  A lot of the farms are in China and they are not very well managed. There’s a lot of bacteria and disease that infiltrates the populations of eel.”

As for sourcing local fish, Tamashii tries to follow the local patterns like that of grouper season.  The restaurant is also in conversations with UNC-Wilmington’s Aquaculture Program about a purchasing contract to buy their black sea bass. They plan on bringing a more local slant to their menu’s produce as well, with a goal to become more involved with community-supported agriculture (CSA) programs of eastern North Carolina farms.  “We are looking at sustainability of the foodshed and what’s important there.”

From Industrial Eats to 95% Local Ingredients: One Chef’s Journey