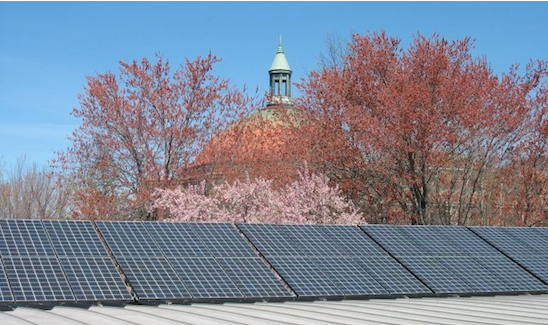 “The Lord God took the man and put him in the garden to till it and keep it.”
Genesis 2:15

Stewardship of the Earth – or creation care – is at the heart of the Bible’s Creation Story.

Allison Reeves Jolley is Volunteer and Outreach Coordinator at North Carolina Interfaith Power and Light (NCIPL), an organization that brings believers of all faiths and denominations together to address the causes and consequences of global climate change. She argues that the prominent placement of environmental concepts at the beginning of the Bible is indicative of their importance to the Christian faith:

“It’s right there at the beginning of the Bible. It’s the earliest and clearest call for Christians to care for the environment. Eco-theologians, such as Dr. Norman Wirzba, often make the connection that this point in scripture is perhaps the clearest instance where God tells humans that our role is to protect the garden of God’s creation. In context, that implies that our polluting of the garden’s atmosphere is in exact opposition to what God calls us to do.”

This is a view echoed by Daniel J. Stulac, a Doctoral student a Duke Divinity School, whose studies look at the Hebrew Bible through the lens of agrarianism. Dominion over the Earth, he argues, is a concept that has been misinterpreted to justify exploitation and depletion of resources. Stulac, who previously managed the organic farm at Dartmouth College, and spent two years in Rwanda with his wife building an agricultural college for subsistence farmers, argues that the concept of earth stewardship is peppered throughout the Old Testament:

“Time and again the Bible looks at ethical principles through the notion of human beings as producers and consumers of food. As Dr Ellen Davis, author of Scripture, Culture and Agriculture: An Agrarian Reading of the Bible, has shown, the story of Exodus 16 – where the Isralites leave Egypt and escape slavery – is really about the notion of a wilderness economy. The Isralites develop morally and ethically in the wilderness. Food is a revelation from God, and you can’t behave ethically while taking more than your fair share.”

Reconsidering faith through the concept of environmentalism, says Jolley, is a useful antidote to a modern culture that often sees spiritual life – and human activity in general – as being somehow removed from the physical world we rely on for survival:

“The idea of tilling the earth, getting your hands dirty, is so removed from our culture. And we tend to hear the messages of our culture when we go to church. It’s often eye opening for people to hear that the Bible has a lot to say about how we treat the environment.”

Organized as a joint effort between the North Carolina Council of Churches and the national Interfaith Power and Light program, Jolley’s group leverages the teachings of all major world religions as a starting point to inspire practical action, as Jolley explains:

“We work across three areas of focus: energy, food and worship. We identify practical actions that congregations can take – from commissioning an energy audit to planting a community garden. More often than not, these actions become a portal into deeper engagement and advocacy, including a shift in how people view their religious obligations to protect the environment.” 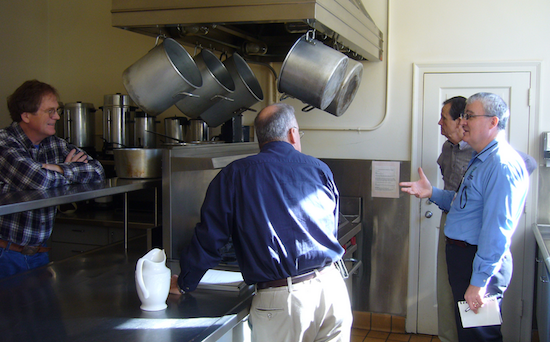 ACTION IS A GATEWAY

The idea of one action leading to another, and another, is central to NCIPL’s work. In the case of the 1st Congregational United Church of Christ, Asheville, for example, the congregation has moved beyond simple energy efficiency measures and lifestyle changes, becoming the first faith community in Western North Carolina to install solar panels on the church roof.

Building on the existing work of the church’s “Earth Team”, a group of congregants decided to form an LLC to install the 42 panel, 9.7kw system. By organizing the project this way as a group of individual investors, rather than as a whole congregation, they were able to enjoy significant tax credits and install the panels at no up-front cost to the church. The group rents the roof space from the church and sells energy back to the grid. Investors expect to make their money back within 6 years, at which point they will either gift the panels to the church, or the church will buy the panels at a rate that ensures nobody loses any money.

The church’s Reverend, Joe Hoffman, explains that the benefits reach well beyond reduced emissions, creating a shifting mindset about how we use energy, where we get it from, and what the moral implications are:

“The project has been a great success. In addition to the obvious helpful benefits of solar on Earth’s ecosystems, the project has also been an educational tool for other faith communities around the country. And we are raising a new generation of people who know that solar power must be part of our larger energy policies in the United States and around the world. It is part of our theology and our economic plan.”

As anyone who follows religion or environmental issues knows, both topics can be a hotbed for divisive political rhetoric. Faith-based environmental groups must tread a particularly fine line when it comes to executing their mission. Nevertheless, says Jolley, it’s important that believers do not just apply their environmental ethics in their personal lives:

“Moral and religious responsibility doesn’t end with personal action – it must include engagement with policy too. We try to help people connect their faith to their politics. We never endorse a particular candidate over the other. But we do encourage everyone to show concern for the environment and to exercise their rights and responsibilities accordingly.”

A WORLDVIEW BASED ON REALITY

Carl Sigel is Chair of the Environmental Committee at the Episcopal Church of the Nativity in Raleigh as well as Chair of NCIPL’s Steering Committee. Among other actions, his group has created a community garden that donates food to the Interfaith Food Shuttle. But it has been particularly active in teaching, praying and preaching about the moral and religious implications of climate change – a topic that inevitably also encompasses politics. Religious leaders, says Sigel, can use their position to move the discussion beyond partisan politics:

“At a time when powerful forces in government, business, and the media divert our attention from an environmental crisis that threatens human civilization and all life on Earth as we know it, as people of faith, we need to be mindful of and thankful for our religious leaders,  who look to both faith and science to develop a worldview based on reality and provide clear guideposts for us to take action.”

An energy audit at the Episcopal Church of the Nativity in Raleigh.

THE POWER OF LEADERSHIP

There is, of course, no consensus view on how – or even if – faith communities should put Creation Care into action. Jolley does not see any one denomination or religious tradition as being inherently more environmentally minded than another. What she does see is a clear increase in engagement that happens when religious leaders speak up:

“In our organization, we tend to see action happening on a case-by-case, congregation-by-congregation basis. What we do see, however, is a real pattern that if and when the leaders of a denomination or congregation speak up, it becomes okay for their congregants to take action too. That’s why we see it as a moral imperative to encourage leaders who have not yet spoken out to do so.”

Jolley’s observation suggests that religious leaders have the potential to wield great influence not just in their congregations, but in society at large. That’s clearly the thinking behind projects like the Evangelical Climate Initiative [ECI], a group of over 300 evangelical leaders that have signed a statement framing global climate change in explicitly moral and theological terms:

“The same love for God and neighbor that compels us to preach salvation through Jesus Christ, protect the unborn, preserve the family and the sanctity of marriage, and take the whole Gospel to a hurting world, also compels us to recognize that human-induced climate change is a serious Christian issue requiring action now.”

The urgency of the ECI’s statement is telling. As scientific evidence continues to mount regarding the pace and severity of climate change, many environmentalists fear the public will simply be overwhelmed by the complexity and magnitude of the issue. This, suggests Jolley, may be another area where Christian groups can make a real difference. Religions, after all, know a thing or two about keeping the faith:

“Each year – the realities of the science become more overwhelming. Therefore, our emphasis on hope has to exponentially increase as well. In terms of climate action, I believe that the biggest debilitator is often denial, which is fueled by a sense of being overwhelmed and hopeless. So, as the science gets more and more towering, NCIPL must be more and more hopeful in positive responses. That is why we work increasingly hard to be pro things – pro renewables, pro action.

We think there is an increasing need for hope.” 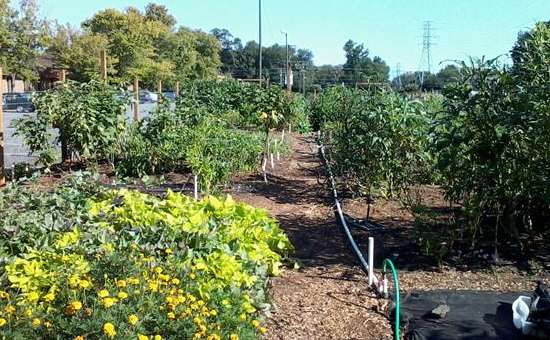 The church garden at the Central United Methodist Church, Charlotte.

Ultimately, though, for most Christian environmentalists the question is not about whether or not we can realistically halt climate change or reverse environmental destruction. Instead, it’s simply a case that the Bible’s teachings compel them to take a stand and fight for what is right, as Daniel Stulac explains:

“Christianity teaches you to love thy neighbor, and even extends that to love your enemy too. But you can’t love your neighbor if you are dumping garbage in their backyard. Knowing what we know about burning coal, rising temperatures and sea level rise, it is a given that island cultures will be inundated and people will suffer as a consequence of our actions. The Christian ethic just does not allow us to consume without restraint or consideration of what our actions will mean for our neighbors.”