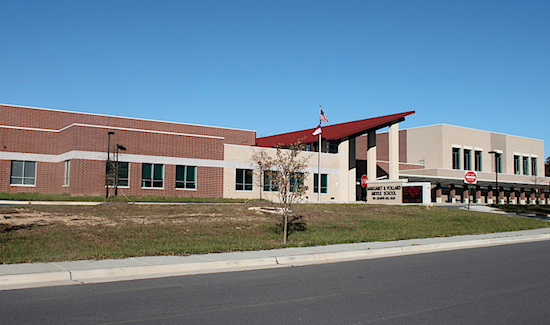 “Without a vision, the people perish.” says Gary Phillips, quoting the Old Testament as he talks about a new middle school in Chatham County. “Schools are one of the central places where people in the community meet–more than churches, town halls or anything else. If you have a school that is performing with energy and with light, the children are going to take it back to their parents. Particularly as our society begins to secularize, schools are the shining light in the darkness.”

It might seem odd to talk about a new school in such Biblical terms, but those who backed the Margaret B. Pollard Middle School do see it as a groundbreaking project, and they are clear about the fact that they intended it to become a focal point for the community around it. Phillips, a former chair of the Chatham County Board of Commisioners, was involved in crafting an ordinance that mandated a minimum of LEED Silver certification for all new buildings commisioned by the county. LEED – or Leadership in Energy and Environmental Design – is a nationally recognized certification program which encourages architects and contractors to adopt environmentally responsible building measures in an effort to cut emissions and reduce energy use.

A VISION FOR THE COMMUNITY

The new school is the most high profile result of the County Commissioners efforts. Spanning 117,216 square feet, and serving 650 students, the school sits on a 31-acre parcel of land that was donated to the county from Newland Communities, the developer of the Briar Chapel residential and mixed-use community. It is surrounded by a network of  existing walking and bike paths which will provide access to future shopping, open space and community parks. 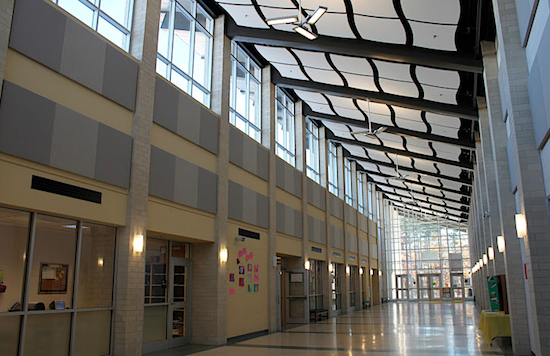 Featuring solatube natural daylighting, gray water recycling, energy monitoring and geothermal heating and cooling, the school is expected to save Chatham County over 36% in its annual energy costs for heating, cooling and lighting the school. That’s a figure that Superintendant of Schools Robert Logan says he is keeping a close eye on, tracking energy consumption in an effort to quantify the costs and benefits of building green so it can better inform future decision-making.

“One of the best things about building green like this is the control it gives you over costs. It’s fairly common, for projects like this, to get utilities to install lighting wth no upfront charge, and to then include those costs in your ongoing energy bills. We did the same here, but predictably they over-illuminated the parking lot. Because of the LEED certification process, however, we had better control over all lighting–letting us adjust the amount of illumination based on what is going on at the school. If we have an event, we illuminate the lot fully. If the school is closed, we maintain a bare minimum for security and safety purposes.”

While some aspects of the building are more expensive in terms of up-front costs, Patricia Brezny of SFL+a architects argues that the LEED design process can yield significant savings. “By using a holistic design approach, the upfront costs of a good sustainable design are also reduced. For example, providing high-efficiency light fixtures in combination with good daylighting and proper shading to reduce solar heat gain, allows for a smaller mechanical systems to be installed in the building. The savings in the mechanical equipment helps to offset the of the sunshades and better lighting and window. The coordination of the mechanical engineer, electrical engineer and architect are required to achieve these savings. During the construction of the building it is important to remember that the building functions as a holistic design and that parts cannot be added or removed without effecting the efficiency and functionality of the building.”

PERFORMANCE IS NOT JUST ABOUT COSTS

It would be a mistake, however, to focus purely on cost savings when discussing the benefits of green building. As Logan explains, building performance is also about well-being and productivity, especially in a school environment. “There’s lots of research to suggest that we all work better when we get plenty of natural light. At Margaret Pollard, 93% of classrooms are illumated by natural daylight. Not only do we improve school performance and student well-being that way, but we also get to talk about it. The school buildings have become an active part of the curriculum, and we’ve developed modules allowing kids to explore topics like solar energy, daylighting or the recycling of building materials.”

That’s something that is reiterated by Brezny over at SFL+a, whose company worked closely with the principle and school administrators. “The principal at Margaret B. Pollard Middle School, Dr. Bartholomew, has taken the school as a teaching tool and fully embraced it. Their annual science night is more of a sustainable building night, where every student studies an aspect of their LEED Gold building and compares it to traditional buildings–showing how it is better for the environment.” 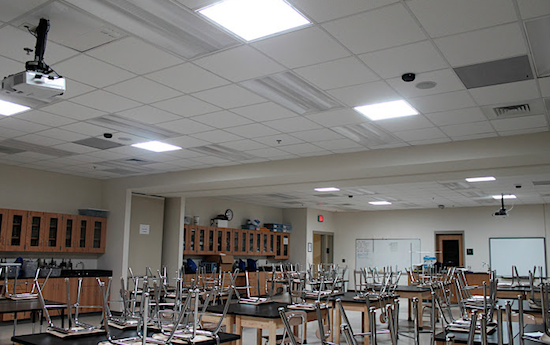 It’s not just the lighting at the school that is intended to challenge the traditional idea that school buildings and curriculum can be considered as entirely separate entities. Instead, the school was designed with the explicit understanding that where you learn shapes what you learn. Learning spaces include formal classrooms, interactive science labs, informal breakout spaces and small group planning and instructional rooms. Each classroom is equipped with smart boards, projectors and wireless internet capability. The student computer labs feature laptops, desktops and an interactive media center with additional smart boards, projectors and computer stations for student use.

Laura Klauke is Executive Director at  the NC Triangle chapter of the US Green Building Council, the body responsible for developing and administering the LEED certification system. She argues that the Margaret B. Pollard Middle School sets an example for how all new schools should be constructed. “We tend to think about education in terms of curriculum and instruction,” Klauke says. “But the school itself plays a huge role too. Daylight, for example, has an impact on school performance. Air quality does too. Asthma is a growing issue for our children. And when you thin that the average American spends 90% of their time indoors, you realize that for kids, schools will be a big part of that time. We can’t afford to ignore indoor air quality any longer.” 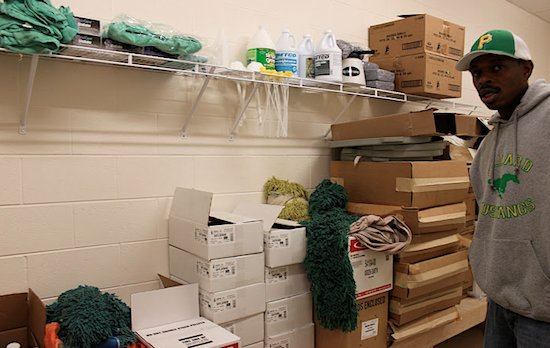 In an effort to protect and improve indoor air quality, non-toxic materials were favored wherever possible and rooms were designed for effective ventilation. The maintenance staff also participates in a green cleaning program, using approved, non-hazardous supplies. This involvement by staff appears to have influenced how many team members view their roles. When NCSC toured the school to take photographs, for example, custodian Tim Bland gave us a personal tour – pointing out many of the green features and explaining how they function.

It’s perhaps the school’s cultural impact that will last above all else. “I was impressed that both staff and students appeared to have a heightened awareness of environmental issues, and how their built environment interacts with the natural world,” says Katie Kross, president of the North Carolina Sustainability Center.

This in itself is a fitting tribute to Margaret B. Pollard, the Chatham County woman after whom the school is named. A former school administrator turned community advocate, Pollard built her own log cabin home with the help of friends and family in the community. She became the first African-American woman to chair the Chatham County Board of Commissioners. Gary Phillips, who was co-chair during her tenure, affirms that the school is a fitting addition to Margaret’s legacy. “As soon as Margaret ran for her first office, I was already in love with her. She gave respect to everyone, regardless of their background and political affiliations. She was a remarkable advocate for smart energy choices, and she came from a deepest sense of sustainability in her own life – what was important to her was not money or assets, but family, community and the world around her. Education was her deepest love.”

It would be a mistake to assume that the green aspects of the school have been universally welcomed. While Superintendant Logan is adamant that the school’s energy efficient features will save the county money over time, there has been vocal opposition from some political quarters–opposition that solidified when Tea Party-backed candidates were elected to the Board of Commissioners. The mandate for all new buildings in Chatham County to be LEED-certified has already been overturned, and uncertainty hangs over those buildings already planned but not yet built. Part of that opposition appears to be focused not on energy efficiency itself, but on the specific value and cost to benefit ratio of the LEED certification process itself, as evidenced by an anonymous post about the controversy on the Chatham Chatlist: “Our County Commissioners did not lower the energy efficiency standards for County buildings… they raised them. They are now requiring that any new construction ACTUALLY be energy efficient … which is something that ‘Leed Certification’ does not require, and it saves the County a ton of money not having to go through the ‘Certification’ process, or use only Leed specified construction materials.”

Wherever you stand on the controversy over the LEED certification process, it seems to make sense that our schools be cost-effective, healthy, productive places for children to learn. The Margaret B. Pollard Middle School appears to be a leader on that score.