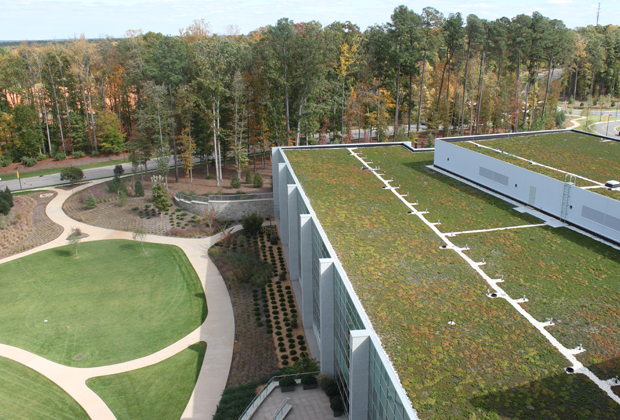 An energy-saving “green roof” is just one of the sustainabilty features at SAS’s headquarters in Cary, NC

“The most formidable challenge we face is global climate change.” That statement comes not from an academic, political pundit or environmental advocacy organization, but from America’s largest bank: Bank of America, headquartered in Charlotte.

In recent weeks, as North Carolina legislators were battling over the use of the word “sustainable” in the government-funded NC Sustainable Local Food Advisory Council, Bank of America was announcing a new $50 billion environmental business initiative.

It is a strange era indeed when big business is more vocal about protecting the environment than government is. Earlier this year, Wake County commissioners rejected a sustainability task force report, claiming that the concept of sustainable development is part of a United Nations conspiracy termed “Agenda 21.” Similar opposition has been voiced this year in Gaston and Moore counties, which passed resolutions against sustainable development policies at the local level.

But Bank of America and other North Carolina businesses recognize that sustainability presents an opportunity for innovation and competitive advantage in the face of future environmental resource constraints.

As the bank articulates in its Commitment to Sustainable Business: “Today, as we make a transition to an environmentally sustainable economy, everyone is going to be impacted – directly or indirectly. Business success will depend upon a company’s ability to adapt to the challenge of global climate change and its related issues of energy, forests, water and biodiversity.”

Bank of America is a leader, but not an outlier. In the business world, corporations are increasingly vocal about their commitment to sustainability principles. North Carolina employers Ingersoll Rand, Novozymes, Duke Energy, Lenovo, Bayer CropScience, Lowe’s, Delhaize Group, Unifi and ABB all have public sustainability commitments on their corporate websites.

IBM, which employs nearly 14,000 people in Research Triangle Park, has an entire line of business focused on sustainability services.

Its website says: “Given increasingly finite resources, businesses depend on balanced natural ecosystems for raw materials, water, energy and the physical health of their employees and customers. They depend on thriving community systems for labor, new sources of innovation and customers. And given the links among its systems, an enterprise committed to practicing sustainability considers both the immediate and far-reaching consequences of any action it takes.”

Why the battles, then, in political circles? Environmental considerations may pose challenges for North Carolina but also new possibilities for innovation and leadership. If North Carolina’s businesses see opportunity in sustainability, shouldn’t we, too, as a state?