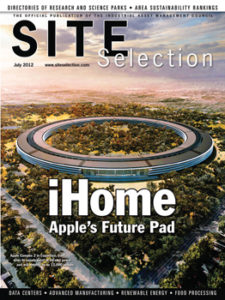 Local sustainability factors were important criteria in the decisions of both Sierra Nevada and New Belgium Brewing to locate their new East Coast operations in western NC, according to the magazine Site Selection, which features the breweries in “Hops City: Beer culture comes to a head in the Asheville region” in its July 2012 issue.

The article describes the extensive selection process used by Sierra Nevada, which chose to build its $108-million brewery in Mills River, NC. Site consultant Don Schjeldahl of Austin Consulting led Sierra Nevada’s location search and is quoted in the article.

As Sierra Nevada’s search for a site evolved over time, the article says,

The screening criteria became much more detailed, including the hard-to-quantify sustainability factor.

“We started to dive more heavily into measuring sustainability as a cultural attribute,” Schjeldahl says. “There really aren’t any great metrics for it. There’s no common way of measuring it. Sustainability is now at a point in site selection in general where companies of all types are starting to think about how they can measure how a community is sustainability-oriented and how it can partner with business.”

Sustainability came into play as the list narrowed to 38 [possible sites]. Community attitudes were assessed. Public transportation, industrial and residential recycling programs and availability of renewable energy were considered pluses.

“If someone had methane recovery from a landfill, they got some points,” Schjeldahl says. “If there were solar panels on a courthouse roof, that got some points. We looked at stream restoration and bike trails. It was also about the ability of communities to tell the story. If a community doesn’t have a good, professional economic development group and is clumsy at it, that tells you something. A healthy downtown was also important. If a community didn’t have a healthy downtown, that would pretty much write the town off. If there is a healthy downtown, it’s a good indicator that there is a good level of cooperation in the community.”

Sustainability also factored into New Belgium Brewing’s decision this year to build a $115-million brewery in downtown Asheville, according to Site Selection. Jenn Vervier, the company’s director of strategic development and sustainability said, “We believe it’s important to have a site where our co-workers can bike or walk to work. That was an easy way to winnow down the choices.”

North Carolina communities and economic developers, take note. Sustainability factors can be differentiators in attracting employers to North Carolina over other states. Beyond logistics, infrastructure, and tax considerations, companies are attracted to communities that appeal to their employees and align with their values–including sustainability.

Asheville, NC will raise a glass to that.