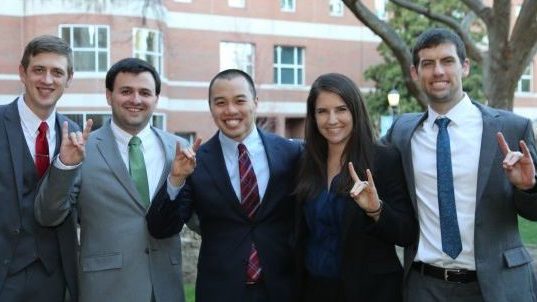 February 24th, 2017 was the second year that a team from the Jenkins MBA program participated in, and placed at the annual Invest for Impact Case Competition, hosted by UNC-Chapel Hill.  The invitation-only competition caters to academic organizations that are members of MIINT (MBA Impact Investing Network and Training) group, and following the stellar second-place performance from last year’s team, the Wolfpack was invited back again to go toe to toe with other teams from around the globe and placed third among a heavily stacked field.

Along with NC State University, teams from UNC Kenan-Flagler, Duke-Fuqua, Chicago-Booth, Columbia, Oxford, and Manchester University participated in the competition. The Invest for Impact competition puts a spin on the standard venture capital case competition format, asking each participating team to evaluate and determine an appropriate investment among three impact-focused entrepreneurs.  Evaluation criteria incorporate the social, environmental, and economic impact that the entrepreneur may have within their community and industry along with the financial viability of the business.

Shannon O’Shea (second year): the sole returning team member from the 2016 team, whose initiative first garnered an invitation to the competition last year.  Shannon has an entrepreneurship and innovation concentration and has a background in both food system sustainability and environmental health. She is a BSC Sustainability Associate and outgoing President of the Net Impact club.

London White (first year) is the team’s finance guru and has an entrepreneurship and innovation concentration in the Jenkins MBA program.  London’s interest lies in technology commercialization, serving as the CFO/ co-founder of the Viemetrics technology startup.

David Catron (first year) is an SCRC Supply Chain Fellow with a background in process engineering. David brought an extensive logistics and process knowledge bank to spearhead the team’s due diligence framework.

Adam Fisher (first year) is a dual-degree candidate in the Jenkins MBA and Plant and Microbial Science Ph.D. programs. Adam is the team’s resident scientist and is also a member of the NC State Net Impact club.

The team was proud of their third-place ranking in this year’s competition; feedback from the judges determined that the final decision was incredibly close.  Additionally, praise was given from the entrepreneurs themselves, citing deep due diligence sessions and strong rapport between the entrepreneurs and the team. This was particularly impressive considering that NC State “does not have any classes that truly examine how to complete the due diligence process”, according to Adam Fisher. Being recognized for the team’s due diligence process was one of his highlights along with “when one of the entrepreneurs said that we asked the most in-depth questions.”

Shannon O’Shea agrees that aside from placing third place, talking with the entrepreneurs was one of her highlights because this process allowed her to “learn a lot about how much work and thought [the entrepreneurs] have put into their idea.” O’Shea hopes that their result will allow NC State to participate in the future with the other top business schools. She continues to state that the team’s success “says a lot about our entrepreneurship program and the critical decision-making skills that we’re getting at NC State.” Harris believes that part of the reason the team was successful was due to their diversity. “The diverse group of students that we can bring to bear in such competitions gives us a unique edge against our opponents.”

The team was competing against top business programs. Edging out the team for the first and second place were the teams from UNC Kenan-Flagler and Chicago-Booth (respectively).  Harris commented on the result, “I’m proud of the team and I believe that placing two years in a row confirms Jenkins’ place among some of the best business programs in the world. I believe our diverse backgrounds and extensive preparation for the competition gave us a competitive edge to offer a compelling investment decision to the judges.”

The team would like to thank the multitude of faculty who gave advice and insight before the competition began, including Dr. Steve Markham, Prof. Lewis Sheats, Prof. Elizabeth Benefield, and Prof. Jessica Thomas of the Poole College Business Sustainability Collaborative.  A special thanks to Bev Porter of the Career Management Center for sponsoring the team’s registration!