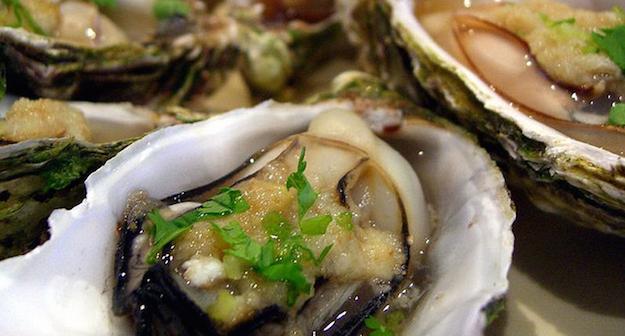 Oysters are an integral part coastal ecosystems, and were once a major industry in North Carolina. Today, oyster harvests are a fraction of what they were at the start of the 20th century, due in large part to dwindling wild populations. Over-harvesting, loss of habitat and pollution all contributed to a 50-90% decrease in the number of oysters in North Carolina waters.

A dedicated group of fisherman and researchers believe that oyster farming could help turn the tide, bringing ecological and economic benefits to our coasts. Oysters raised in bags and cages can be harvested year round, and innovative mariculture techniques allow oyster growers to tailor their oysters to match customer preferences.

The benefits of cultivating oysters extend far beyond the humans making money from their sales. Oysters are a keystone species, contributing to the overall health of coastal ecosystems in a number of ways. They filter water, removing algae and excess nutrients which contribute to vast dead zones in coastal waters. This filtration improves water quality, allowing more sunlight to reach aquatic vegetation like sea grass. The oyster reefs also provide important habitat for a number of other fish and crustacean. Oyster farms get more of this important species into North Carolina waters, and take some of the harvesting pressure off of wild populations.

Unfortunately, sustainably farmed oysters currently makes up less than 20% of the total North Carolina oyster industry. Though the state of North Carolina has taken steps to help the wild oyster population bounce back, policy makers don’t yet see oyster farming as an ally in these efforts, according to Jay Styron, who has been growing oysters in Cedar Island Bay since 2006. Unlike in Virginia, where state officials have made a concerted effort to help oyster production increase 35 times since 2005, the push for more oyster farms in North Carolina is primarily coming from growers and researchers at the grassroots. The way that North Carolina regulates oyster farming makes it challenging for new growers to enter the market. Styron explains:

“The department that is in charge of overseeing shellfish operations is the Division of Marine Fisheries, and their mandate is to manage resources for fishermen. [Our oysters] are not a wild resource. We have a cultured product that has nothing to do with the wild product, except that we grow it in the same water. So they try and take one set of rules that would apply to a wild stock, and try to fit us in it and it just doesn’t work… What we do doesn’t take anything out of the wild, but still supplies the market with a high quality shellfish.”

Styron is quick to note that he believes wild caught oysters have a place alongside their cultivated cousins, but hopes policy makers come to see oyster growers as allies in efforts to regenerate North Carolina coastal ecologies and economies.