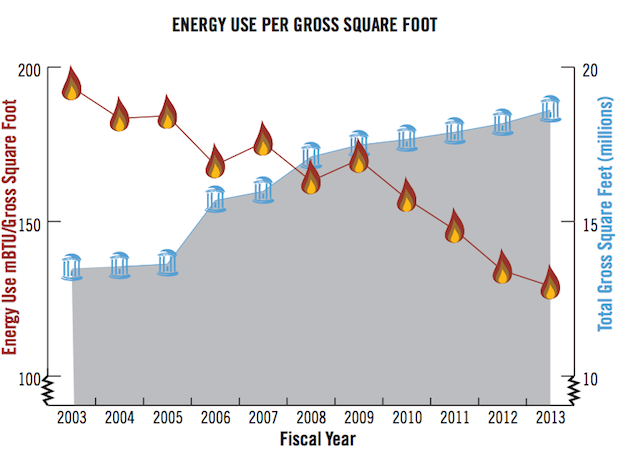 Like NC State’s impressive sustainability achievements, the rest of UNC’s 17-campus university system is in the midst of a major, long-term transition toward sustainability. With an eventual goal of reaching carbon neutrality at every campys by 2050, individual campuses are enacting interim goals and initiatives that seek to reduce energy, water and resource use, as well as increasing the consumption of renewable and other low-carbon fuel sources. As part of those efforts, UNC has already cut energy use by 20% per square foot in the last decade, and potable water use by 40% in that same time period. UNC’s various campuses have also made some early investments in renewable energy, including a 100 kW wind turbine and nearly 30 kW of solar PV at Appalachian State University, and 130 kW of solar PV on campus buildings and homes at NC State. Across the UNC system, campuses saved over $74 million in avoided energy costs in 2012-2013, compared to a baseline year of 2002.

A cross-disciplinary team from the UNC system recently attended a week-long eLab Accelerator event hosted by the Rocky Mountain Institute. Billed as a “bootcamp for electricity innovation”, participants were challenged to develop a clean energy strategy specific to the challenges that UNC faces. According to a post over at Cleantechnica, among the challenges identified by participants was the management of aggressive sustainability goals across diverse campuses, administrations, and regions, as well as the challenge of making renewables and energy efficiency competitive with fossil fuels in a state with relatively low energy prices.