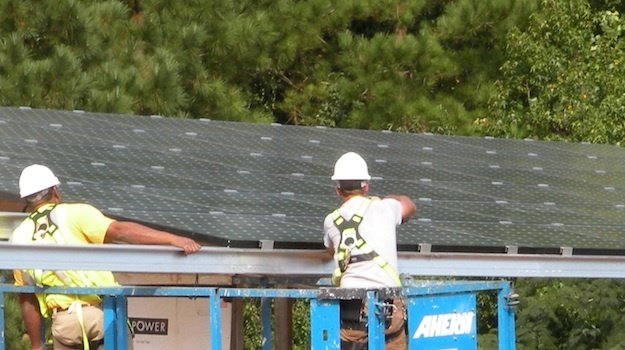 With big business investing large amounts in NC solar projects, it was little surprise that NC ranked among the top states for solar installations in 2013. But what does this mean for the state’s economy, and is solar an outlier, or part of something bigger? According to the NC Sustainable Energy Association’s 2013 Census, the entire NC clean tech sector exhibited robust growth in 2013, growing jobs to 18,404 full-time equivalent employees – up by 20% from the year before. And while RTP may be positioning itself as a clean tech/smart grid cluster, this growth seems distributed across all corners of the state – including several rural areas struggling with high unemployment.

While the numbers are encouraging, continued growth is by no means a foregone conclusion. Ivan Urlaub, Director of the NCSEA, suggested that good, forward thinking clean energy policy is crucial to keep the clean tech sector growing:

“The numbers in this year’s Census leave no doubt that the clean energy industry is continuing to emerge as a valuable contributor to the state’s economy. But growth like this doesn’t happen by accident or chance. It is the result of entrepreneurs, investors and workers receiving a clear message that North Carolina is ‘open for business,’ and that only comes about through good clean energy policy.”

The Census presents findings based on data collected from 570 firms operating within North Carolina. This represents approximately 52% of the estimated 1,100 firms currently conducting clean energy related business in the state. Read the full 2013 census here.