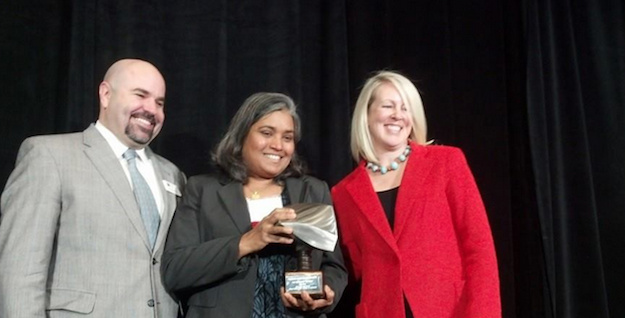 “Nobody turned away due to lack of money. Food is a human right. When Vimala cooks, everybody eats.”

This statement sits on a sign outside Vimala’s Curry Blossom Cafe in downtown Chapel Hill. Taken by itself, this policy is a generous commitment to fighting hunger in the community. But it’s just one aspect of Curry Blossom’s good-for-the-world efforts which, when viewed as a whole, can be seen as a much broader vision of what a sustainable business might look like.  From a commitment to purchasing local, sustainably grown food through community education workshops to a policy to pay all workers a living wage, Vimala Rajendran has built a business that is based on values she sees reflected in her community. (As an early precursor to the region’s Slow Money movement, the restaurant was started with over $80,000 of community-based investment.)

Already lauded as one of the area’s best Indian, and best vegetarian, restaurants – Vimala’s just received another honor – being named 2013 Midsize Business of the Year by the Chapel Hill Carrboro Chamber of Commerce.

Below is a short interview with Vimala about the cafe’s evolution.