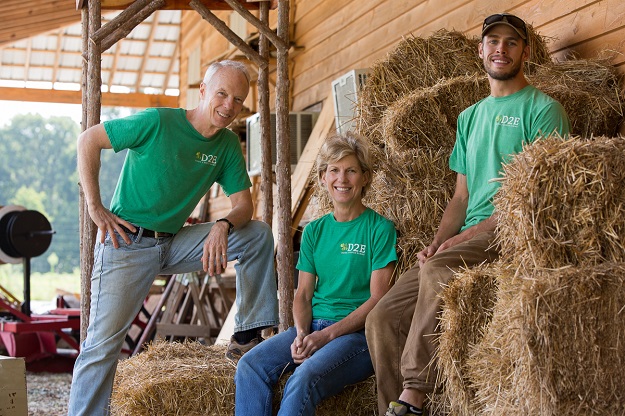 Next weekend, on April 25 and 26, forty local farms will open their gates to thousands of visitors on an annual pilgrimage. This year marks the twentieth anniversary of the Piedmont Farm Tour, an opportunity for local eaters to seek a deeper connection to the people and land that sustain them.

The farm-to-table movement: 20 years of growth

Much has changed since 1996, when Betsy Hitt of Peregrine Farm first suggested the farm tour as a fundraising idea for the Carolina Farm Stewardship Association. The event, which is co-sponsored by Weaver Street Market, brought in almost 500 visitors to 14 participating farms the first year. Now, the tour is the largest of its kind in the U.S., according to CFSA.

Cathy Jones and Mike Perry of Perry-winkle Farm have participated in every farm tour since the beginning. “It’s kind of eye opening to think, ‘Oh yeah, that was 20 years ago,’” laughs Jones. At that time, the sustainable farming community comprised a tight-knit group of friends, and many of the tour-goers were customers of Weaver Street Market and the Carrboro Farmer’s Market.

“When the tour first started,” says Jones, “we saw a higher percentage of people exploring the potential of starting their own farms. We would sit down and talk irrigation and seed sources and the best place to buy amendments from.” Jones says there’s been a shift in why many visitors seem to participate in the farm tour. “Now, we see more consumers wondering where the things they eat are being grown. There is a higher percentage of parents wanting to show their kids where food comes from.”

The Peregrine and Perry-winkle farm stands are an institution at the Saturday morning farmers market in Carrboro, which bustles weekly with customers in search of fresh cut flowers, seasonal produce, pastured meat, and wholesome eggs from free-range chickens. Twenty years ago, Carrboro was among just a handful of markets in the area. But, with the growth of the farm-to-table movement, more farmers markets have opened to meet the demand from consumers who are eager to have a personal relationship with their farmer. “Back when we first got started,” says Jones, “there just weren’t many farmers markets. The Carrboro market was there, and the Cary market opened, and then Fearrington Village started in 1991. But there’s been a tremendous growth. Chatham just had one, and now I think there are five.”

Participating in the farm tour every year has helped Perry-winkle cement stronger relations with its market customers, says Jones. “We probably gain new customers every time we have people come out and see how Mike raises his chickens. They realize they don’t want any eggs but his.” She says the tour is also a way to give back to CFSA, an organization that advocates on behalf of small sustainable farms. “We can’t always write them a big check every year, but we can host the farm tour every year.”

Access to land is one of the biggest challenges Jones sees upcoming farmers now facing. “If they aren’t born onto family land, they’ve got to borrow it, and find good fertile land within a good distance from a good market. I think that’s a real hardship,” says Jones. “We’re involved in the Central Carolina Community College sustainable agriculture program in Pittsboro, and I hear time and time again about this issue from students completing the program. I don’t think it’s a roadblock as much as we need to find routes for new farmers to connect with retiring farmers who don’t have other generations in their family that want to take it on.”

Jones is optimistic that the momentum of interest in sustainable food and farming that’s happened in the Piedmont has the potential to thrive elsewhere. “This area of the state is considered a real hotbed of sustainable agriculture. We like to think of ourselves as trendsetters. You know we’ve been blessed, not only with good farmers markets and good customers, but also with the number of locally owned and chef-owned restaurants in this area. But I think this can be replicated pretty successfully anywhere there’s a lot of eaters.”

A new generation of farmers

Sweet Pea Farm in Hurdle Mills is one of four new farms on the tour this year. Owners Carolyn Twesten and Steve Rankin grow a mix of vegetables, flowers, herbs, and mushrooms that they sell at the Carrboro and Eno River farmers markets.

Twesten, who says she fell in love with farming at nineteen, saved money for almost ten years to buy land. “Even now that we own a farm I still work full time to finance the operation,” says Twesten. “And, of course, time is money. So I am trading time working on the farm for a steady paycheck. It can be frustrating sometimes but I just try to keep in mind that all of those farms that I visited on the farm tours of the past have been at it for years, and they all had slow starts as well. We’ll get there someday, if slowly.”

With dual roles as a market farmer and as a produce manager at Weaver Street Market in Hillsborough, Twesten is in a unique position to reflect on the value that customers from the community place on local and sustainable food. “When I first started at Weaver Street thirteen years ago,” she says, “‘sustainable’ was a term mostly known to the small organic farm community, not as much to the average consumer. Customers would come into the store looking for ‘certified organic’ produce, at which time many growers were choosing to stop certifying because of the transition to the National Organic Program. So many customers were buying California organic produce because the certification was important to them. In the past five or more years though, there has been a definite shift to customers wanting locally grown products over certified organic products grown afar. I’m not sure what has caused that shift, if it was Barbara Kingsolver and Michael Pollan or something else, but it has been exciting and encouraging to watch. This community is so supportive of local agriculture and artisans, it makes it that much easier for a new small farm like us to get off the ground.”

Twesten says that visitors on the tour may be interested to see how they maximize limited space on the farm to plant a diversity of crops.  “We really make use of some of the awkward spaces on the farm that aren’t well suited to row crops, such as the old terracing which we planted with a small fruit orchard [and] the edges of the woods where we raise shiitakes. I think it’s also a realistic view of what it’s like to start a farm with limited funds, which could be encouraging to all the potential new farmers out there.”

Formerly the site of a late nineteenth-century dairy, Down 2 Earth Farms in Rougemont is another new farm on the tour this year. Cecilia Redding purchased the property in 2011, after working 25 years in the food and beverage industry saving up money to buy land to become a farmer.

“I decided to be a farmer when I was an undergraduate at University of Florida,” says Redding. “I majored in Agriculture and Biological Engineering because I fell in love with all the science behind farming. There are not many careers that use so many aspects of science like farming!”

Down 2 Earth sells produce at the South Durham Farmers Market and through local retail and delivery services like Papa Spuds, The Produce Box, and LoMo Market—all area food businesses that cater to the surge in consumer demand for local food.

“To me, local means freshly harvested (within a day or two), a very low carbon footprint in transportation, and putting money back into the local community,” says Redding. “Freshly harvested food not only tastes better but also it is healthier.”

Redding says that she is looking forward to talking with visitors about how organic agriculture benefits the environment and preserves it for future generations.  “I think all farmers love to talk about their land and what they are growing,” says Redding. “It is rewarding to have people interested in the farm. We are excited and proud of growing local food with sustainable practices and would like to share it with as many people as possible.”

More information about the Piedmont Farm Tour is available on the CFSA website.