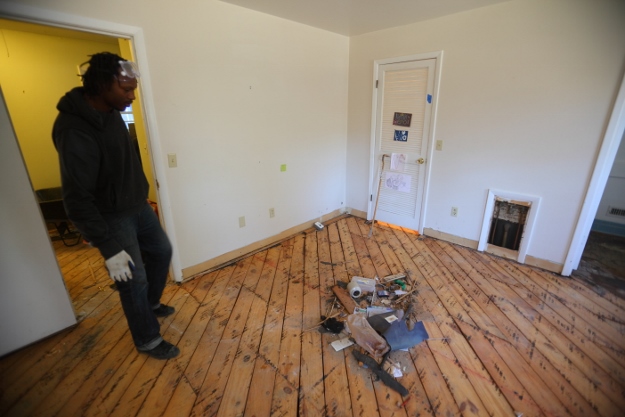 Raw sewage flooded the offices of the Eno River Association last week, when a failed Durham city sewer main backed up, causing major damages that may total as much as $100,000.

The oldest land trust organization in North Carolina, the Eno River Association is an environmental nonprofit that has been instrumental in acquiring parkland and promoting conservation since the 1960s. Now the group faces a daunting recovery effort.

Staff arrived to work on Monday, January 12, to find sewage spilling out of the office’s four toilets and flowing throughout the building and HVAC system, in some places to a depth of four inches. The offices are located on the banks of the Eno River, but it is believed that none of the sewage reached the water. Greg Bell, director of the organization’s popular annual fundraiser, the Festival for the Eno, says months of repairs will be necessary to demolish and reconstruct much of the building’s interior, once the environmental clean-up is complete. All staff are being vaccinated for Hepatitis A, and the group has relocated temporarily to the offices of Epting and Hackney Attorneys in Chapel Hill.

While the city admits responsibility for the sewer failure, liability is capped at $15,000, which means the Eno River Association must cover the bulk of the damages, according to Bell. Most cities have coverage that is even lower, he points out. Still, excluding land campaigns, the estimated cost of repairs totals almost 20 percent of the group’s annual budget.

“Luckily we have cash reserves and equity, so we won’t go belly up,” says Bell. “But every dollar we spend on this is money that won’t go to land protection or education, not to mention the toll on the staff.” Despite the disaster, Bell says the group remains dedicated to performing their mission. “We’re still working to preserve land, we’re still focused on educating the community, and we’re still working with local and state governments to advocate for the greater commitments to our clean drinking water and parks, all while working out of temporary offices and with fewer resources available.”

The Eno River Association has helped protect more than 7,000 acres along the river. The group sponsors weekly hikes, offers thousands of hours of outdoor education annually in parks and in schools, and hosts a two-week summer camp that is free for students from low income families. All of the camp materials—magnifying glasses, beakers, test tubes, posters—were stored in the office basement, which was flooded by sewage. A classroom in the building is also now out of commission until repairs are finished.

Fortunately, says Bell, most of the organization’s computers were left undamaged. “All important files were not directly affected and most of our considerable archives were spared.” But the basement also housed more than $25,000 worth of t-shirts, which were inundated with sewage.

“We want to thank Epting and Hackney for taking us in, and TROSA (Triangle Residential Options for Substance Abusers) for helping us salvage what we could from the building,” stated Executive Director Robin Jacobs a press release last week. “We appreciate the support we are already getting. For now, there is not really anything that volunteers can help with, but the Association will let people know when that changes.”

Bell says the organization’s biggest needs right now are financial assistance and public attention directed to their plight. “We are asking people to forward, “like”, tweet, and share news about the disaster and recovery, and of course, give if they are able,” says Bell.

Contributions to help cover the cost of damages can be made on the organization’s website, which will soon post a list of needed services and items like furniture and supplies. An upcoming fundraiser is also planned for February 21 at the ArtsCenter in Carrboro, featuring a dance party with Kaira Ba, a kora-based African fusion band.

“Our staff, volunteers, and members are fabulous,” says Bell. “With their help, I have no doubt that we’ll be able to host a number of successful events throughout the year.”

Below is a video made by Greg Bell showing the extent of the spillage when it was first discovered.