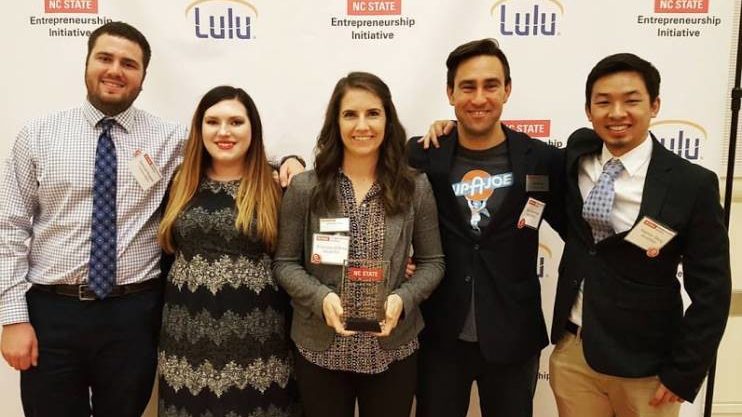 By Anna Rzewnicki and Iman Usmani

The Lulu eGames, held each spring at NC State to encourage entrepreneurship and innovation, offered a new category this year: the B Corp Champions Challenge. Student teams entering ventures in this category were judged not only on their business model and other aspects of their entrepreneurial ventures but also on the social and environmental impacts of their product. The new track was launched as a partnership between the Poole College Business Sustainability Collaborative and NC State’s Entrepreneurship Initiative, with support from local B Corp Champions Seventh Generation, The Redwoods Group, Murphy’s Naturals, HQ Raleigh and Loading Dock Raleigh.

The B Corp Champions Challenge provides an opportunity for student entrepreneurs to develop an entrepreneurial concept through the lens of a certified B Corporation. B Corps are for-profit companies certified by the nonprofit B Lab to meet rigorous standards of social and environmental performance, accountability, and transparency. The Challenge is designed for students who are building ventures that are using business as a force for social and environmental change.

Other eGames categories include New Venture, Design and Prototype, and Arts Feasibility. The first round of the B Corp Champions Challenges included 15 teams composed of 47 students from across NC State. Students submitted an executive summary and video submission. Seven finalist teams were selected to participate in the second round which required the submission of a business plan and participation in a pitch competition.

“This may be the first B Corp pitch ever,” said Chris Lawrence, one of the judges for the B Corp Champions Challenge pitch competition. He manages strategy and business development at Sellware. Also judging were Katie Gailes, director of Entrepreneurship Initiatives at Wake Tech Community College; Dragana Mendel, management consultant and founder of ANAGARD, LLC; Dan Moore, product scientist at Vaporware, Inc., and Christina Smith, consultant specializing in marketing at The Redwoods Group.

Following are descriptions of the 2016 B Corp Champions Challenge finalist teams:

SuperVIZE is a Wi-Fi enabled device worn on a child’s wrist that indicates when the child has left a predetermined safe zone. The team plans to sell the product to those who care for large numbers of children, such as teachers and child care providers.

Nonwoven Air Filtration Curtain provides a low-cost way for households in regions with high levels of air pollution to effectively clear the air in their homes when opening their windows. The polymer used in the curtain is able to hold back pollution molecules while letting fresh air into the home. The product also can be personalized with an image printed on the fabric.

MitoSPEED uses a mitochondrial DNA process to test food safety more quickly than other processes, curtailing the problem of food being sold before going through proper testing and reducing the potential for recalls when contamination is identified after being sold.

Malkuta Project, based on the founder’s work with Boys and Girls Club in Raleigh, aims to help keep kids off the streets by connecting them in “arts and media based home.” Participants in the six- to eight-week program would learn the fundamentals of creating videos for organizations. Once cash flow is established, the founder hopes to create a scholarship fund to help those not able to cover the fee to participate.

Noble Nourishment is on a mission to fight food waste by buying and reselling the food that grocery stores would otherwise throw. The startup computed that about $2,300 worth of food is wasted by each grocery store each day.

PURE is a coffee machine made of recyclable materials that roasts fresh coffee beans, eliminating the need for non-recyclable coffee cups used in other personal-serving brewing machines. The founders are also working on having their coffee beans be completely fair trade.

About 250 people attended the Lulu eGames finals round at NC State’s Talley Student Center on April 14. The grand prize and $4,000 went to Nonwoven Air Filtration Curtain; SuperVIZE received second place, $2,500 and the Judges’ Choice award for commitment and presentation, MitoSPEED won third place and received $1,000 and Malkuta Project received the Judges’ Choice award for vision and impact. Winner of the Judges’ Choice awards received membership to HQ Raleigh to continue to develop their ventures. Teams could also enter a fan favorite video competition; the Nonwoven Air Filtration Curtain team won that with their video that included intense graphics and music to present the immense effects of air pollution on populations in developing countries. This team had developed its product based on brainstorming in their Nonwoven Product Development class and plans to continue investigating further to optimize their product. The eGames gave a total of $60,000 in cash prizes.

“As a first-year student, it was definitely different from anything I had ever been to,” said Iman Usmani, a BSC Associate who attended and reported on the eGames and B Corps Champions Challenge. “The amount of innovation and the number of ideas that were floating around the room was mesmerizing. Aside from the ideas, the most impressive part of the event was that the students were taking the opportunities that NC State provides them in order to turn their ideas into something that can fix a problem, while also keeping our people and planet in mind.”