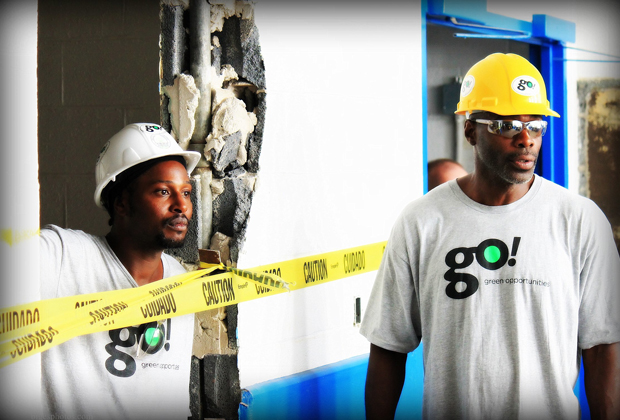 If Van Jones is the father of the “Green Collar Economy,” then Dan LeRoy and DeWayne Barton are certainly close relatives. After attending a national conference called “Good Jobs, Green Jobs” in 2008, LeRoy and Barton were inspired to start Asheville Green Opportunities (GO) to help train unemployed young men and women for careers in emerging clean economy industries—what they saw as an opportunity to help communities on multiple fronts at the same time.

“Creating jobs is a vehicle to social change,” says LeRoy.  Barton and LeRoy recruited eight participants for that first program in 2008 and put them through 15 weeks of training in clean economy skills like solar panel installation and rainwater system construction, as well as confidence-building activities like mountain climbing.

Since its first year, Asheville GO has grown dramatically from a staff of two with an $80,000 budget to a staff of 25 with a $1.4 million budget.  Funding comes from public and private building performance and training contracts, as well as support from individuals, businesses and foundations. 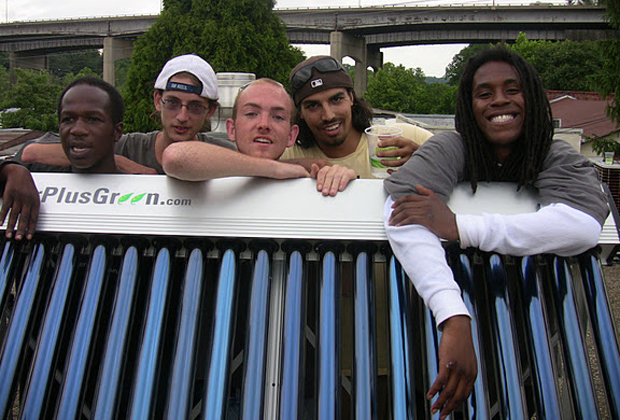 So far, 388 GO members have completed trainings, 118 have been placed in jobs and 478 have achieved technical certifications.  These jobs, by LeRoy’s estimate, have resulted in $555,000 of economic impact in the local neighborhood in wages and stipends paid directly to GO members.

Creating tangible environmental impacts is also part of GO’s mission.  Through GO social enterprises aimed at improving energy efficiency and water conservation in low-income neighborhoods, GO estimates that its members have weatherized 167 homes and businesses, as well as 1,100 public housing units, saved approximately 745,800 kilowatt-hours of electricity annually, and saved 1,092,700 pounds of CO2 annually.  They project that these improvements have provided over $53,520 of total annual savings in home energy costs for local low-income households.

Asheville GO recently partnered with the Housing Authority of the City of Asheville to purchase and renovate the W.C. Reid Center and turn it into a Green Jobs Training and Adult Education Center. With a grant from the U.S. Department of Housing and Urban Development, the Center will train hundreds of public housing and other low-income neighborhood residents.

“I felt like there was a real opportunity,” LeRoy says, “to make progress toward environmental and social justice goals at the same time.”  So far, Asheville GO is doing just that.