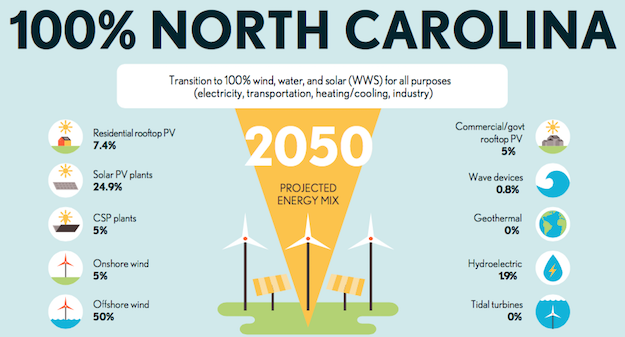 When Apple, Google and Facebook warned NC legislators against freezing renewables targets, they hinted very strongly that the state’s growing prowess in renewable energy was a key factor in their investments here. Yet, whenever discussion about renewable energy comes up, many detractors still cite economic cost and technical challenges as a major reason to stick with the status quo. A new study led by Stanford civil and environmental engineering professor Mark Z. Jacobson, and published in Energy and Environmental Sciences, suggests that a 100% renewable energy future is not just possible for North Carolina, but would actually lead to net jobs growth and significant economic advantages.

What makes this claim even more remarkable is the fact that Jacobson’s team hasn’t just mapped out a path for North Carolina, but for every other state in the country too—using a combination of the natural resources available for each state, and projections on energy efficiency and demand reduction, to create scenarios for the future energy mix for electricity, transportation, heating/cooling and industry too. And if 2050 feels a long time away, it’s worth noting that the plans actually contemplate a whopping 80–85% of existing energy replaced with renewables by 2030, with the rest being phased in by 2050.

Given the monumental scope and ambition of this project, there will no doubt be quibbles and questions about the specific statistics and assumptions being made. Still, for advocates of renewable energy, it will be extremely encouraging to see what researchers believe to be possible.

So what does a 100% renewable future look like for NC? Unsurprisingly, given North Carolina’s huge offshore wind resources, Jacobson’s team projects 50% of our energy mix coming from offshore turbines. The rest is outlined below, in an infographic from The Solutions Project, an advocacy campaign which (full disclosure!) Professor Jacobson is on the board of.

And as for how much this all costs, the team of researchers suggests that any economic costs would actually be more than compensated by the ecological, health and straight-up economic benefits of ditching fossil fuels:

Anyone interested in making this future happen or learning more about the potential of renewable energy can join The 100% Campaign, co-founded by actor Mark Ruffalo.