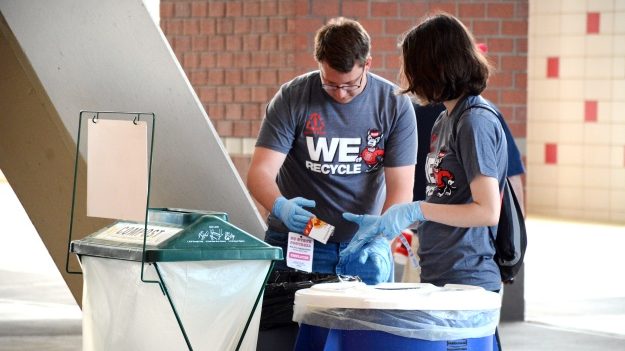 NC State’s Carter Finley Stadium is striving for zero waste starting this fall, thanks to a collaborative partnership between the Wolfpack Athletics Department and sustainability partners across the campus.

Zero waste is an environmental philosophy that aims to save landfill space and reduce the use of natural resources through increased re-use, recycling, and composting efforts. Two other regional university athletic programs, Duke and UNC-Charlotte, are working toward zero waste status, which is commonly defined by diverting at least ninety percent of the waste stream away from the landfill.

The Wolfpack already has a longstanding recycling program, with 84 percent of fans recycling in the stadium and tailgate lots, and more than 42 tons recycled in the 2014 season. The zero waste program will build on this effort by adding options for composting and encouraging stadium vendors to switch to compostable cups, plates, and utensils, though it may take a few seasons to implement this transition. Tailgating lots are often the locus of consumption and waste, so the program will look at ways to encourage fans to reduce their environmental impact before the game too.

Dr. Jonathan Casper, a professor in the College of Natural Resources, has aided in the collaborative efforts to green the Wolfpack athletics program. He began looking at the environmental impact of sporting events four years ago after hearing a statistic that the trash created during an athletic season could fill the entire bowl of a stadium. In his recently released book, Sports Management and the Natural Environment, Dr. Casper provides a lens to consider sports as an important environmental advocacy tool in local and global communities.

“Sports stadiums are a good example to show if it can be done there, it can be done anywhere,” says Casper. We’re capturing an audience through their lifestyle, through something that they like and are having fun doing and, in an informal and nontraditional way showing how they can change behavior. Sports can be a unique vehicle to educate people about how they can be more environmentally responsible in their everyday lives.”

Dr. Casper initiated a dialogue between the athletics program and NC State’s sustainability and waste reduction and recycling offices, which led to the formation of a committee on sustainability in athletics. After hosting four successful zero waste athletic events at the school this year, the committee is targeting a more ambitious goal of working toward year-round zero waste at the stadium, starting this fall.

The biggest cost factors in the effort are the fees associated with compost pickup. The Office of Waste Management and Reduction and Recycling is offsetting those costs, however, through savings by reducing the number of landfill roll-offs.

Dr. Casper points to the Philadelphia Eagles and Colorado University as models of sustainability that demonstrate the potential for sports to encourage environmental responsibility among fans and community. A critical aspect of making zero waste successful is creating fan engagement through messaging, explains Dr. Casper. Wolfpack fans will learn about their role in sustainability efforts through PA announcements and videos during the games.

Zero Waste is one of seven sustainability themes promoted through NC State’s Sustainability’s Change Your State initiative. The campaign encourages students to see how small behavior changes have the potential for a big impact on the community.