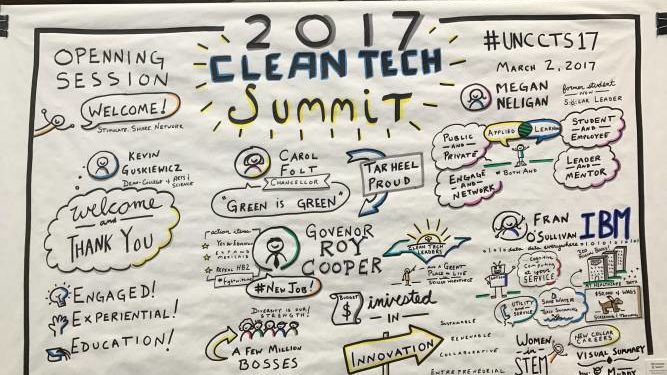 A few words from the 2017 Clean Tech Summit

Out of North Carolina’s 100 counties, 40 are designated as Tier I counties— i.e. economically distressed. If you’ve ever driven through rural North Carolina, you know a Tier I county when you see it. The buildings are often falling apart, the infrastructure is crumbling, and many of the people who live there suffer from lack of clean water, healthcare, and access to a stable income. The NC Department of Commerce makes its Tier I designation based on the average unemployment rate, median household income, population growth rate, and adjusted property tax base per capita.

If almost half of the counties in North Carolina are distressed, what should be done? We need creative solutions to alleviate the economic hardship these communities face.

Case in point: The Amazon Wind Farm in Pasquotank and Perquimans counties. Craig Poff of Avangrid Renewables presented the following inspirational message on the power of signals.

Altogether, Avangrid acted upon these signs and invested 400 million in the 208 MW capacity project. This is the equivalent of powering 61,000 homes.

The Amazon Wind Project employed more than 30 local businesses and spent approximately 18 million on local services through the construction phase alone. At the same time, Avangrid built roads which helped landowners get better access around their land, and supported building supplementary infrastructure. Benefits from the added tax revenue are substantial: over half a million annually, including compensation and healthcare savings, with no cost to the community. In comparison, non-renewable projects burden communities with environmental and health costs. Essentially, Avangrid now pays these Tier I landowners more than 625K a year.

The electric generation system is changing. The energy grid is becoming bidirectional. Just a few years ago, utilities were not keen about renewables coming onto the scene. Fortunately, they’re starting to see the economic benefits—whether it’s “clean” or not.

Much like the changing electric transmission system, economic signals ought to go both ways as well. The signals of economic growth from a project like the Amazon Wind Farm should be clear to our legislature – implement policies that invite renewable energy investors to the table.

Likewise, business models of global corporations are changing. Many mega-companies like Goldman Sachs, IKEA, Bank of America, Facebook, and Google are pledging to go renewable, some as soon as 2020. These changes incorporate more than just energy sources. Businesses are changing internal and external supply chain policies: demanding their suppliers walk the walk, or they will purchase elsewhere. The demand is shifting the whole supply chain. As such, there are operating constraints underway with such growth. The state needs to recognize its role in developing policies and incentives to allow businesses to be more effective through this transition and furthermore, attract more industries for job creation.

Energy price constraints are changing as well. Wind energy is rapidly dropping in price. When total costs are compared across the energy spectrum, the wind is now the least costly form of energy technology – without subsidies. In fact, wind and solar together make up 60% of all new energy generation in the US, followed by natural gas, at 32%. Across the nation and in our home state, investment in renewables just makes economic sense. That is if the policies send strong, solid signals to the investors that North Carolina is a low-risk, opportunistic location for business.

Along with these groundbreaking stats, the DOE’s US Energy and Employment Report (USEER) for January 2017 shows that solar now creates more jobs than all other industry technologies available. Not only is it leading the industry in job growth, but from 2006 to 2016—in just a single decade—it exploded 5,000 percent, going from 508,000 MWh to over 28,000,000 MWh (Emerson Urry, EnviroNews). Let’s not forget that North Carolina is second in the country for installed solar. And this is just the beginning.

As North Carolina’s population is expected to grow substantially, shouldn’t we be planning for our increased energy needs as well as the jobs that would correlate with this increased demand?

It’s an economic and social no-brainer that our regulatory structure should favor renewable energy. In doing so, North Carolina would send clear signals to the industries waiting on the line to invest millions in rural areas to strengthen these economically distressed counties, before they move on to other, more opportunistic locations.

Rural North Carolina needs these investments now. What signals are we sending on behalf of our state to the benefit or detriment of our economy and commitment to job creation?