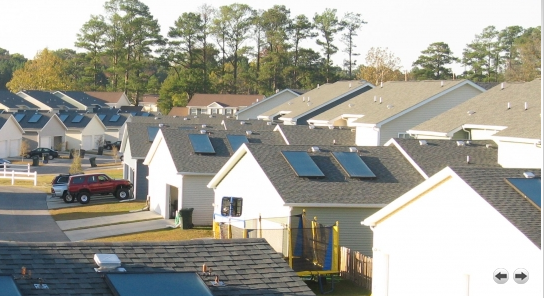 There was a time when solar panels and renewable energy were considered somewhat fanciful solutions, more appropriate for the hippy communes of California than the military bases of Eastern North Carolina. But that reality is shifting, and the shift is only partially related to a desire to protect our ecosystems.

“We made them a solid business proposition – that we could install these panels and sell them the energy at less than the cost of the electricity they were buying – and they chose to go for it. This is absolutely being driven by cost reductions as a primary motivator.”  That’s how Michael Shore – CEO of Asheville-based FLS Energy – describes his company’s solar thermal installation at Camp Lejeune, the Marine Corps’ 244-square mile base in Onslow County, NC.  Working closely with Actus Lend Lease, a real estate developer that is coordinating the project for the military, FLS has now installed over 2,000 solar hot water panels on Camp Lejeune houses, with each of the installations providing up to 75% of a household’s hot water needs.

The economic proposition is just one part of the puzzle, however. Over the past decade, the military has become increasingly engaged with environmental sustainability as the environmental, social, and geo-strategic implications of issues like climate change, biodiversity loss and resource depletion have come into sharp focus. Journalist Steven Kotler has already documented how the DoD – as one of the nation’s largest landowners with over 30,000,000 acres at their disposal – has been working with environmental groups to transform their land management practices in favor of conservation. Similarly, the military has set ambitious goals to have 30 “Net Zero” installations by 2030. This extract from the Pentagon’s website provides a compelling illustration of how far the concept of sustainability has come in military circles:

“Today the Army faces significant threats to our energy and water supply requirements both home and abroad. Addressing energy security and sustainability is operationally necessary, financially prudent, and essential to mission accomplishment. The goal is to manage our installations not only on a net zero energy basis, but net zero water and waste as well. We are creating a culture that recognizes the value of sustainability measured not just in terms of financial benefits, but benefits to maintaining mission capability, quality of life, relationships with local communities, and the preservation of options for the Army’s future.”

While Shore maintains that it’s the business case driving projects like the Camp Lejeune solar installation, he acknowledges that a high-level commitment to energy efficiency and clean energy has certainly helped to bring initiatives like this to fruition.

As any cursory review of media coverage or online discussions reveals, there are still plenty of loud voices in the political sphere who describe climate change as a scam and clean energy projects like this as a waste of taxpayer money. Diana Potts of G & E Advisors, an expert in government contracting and an industry advisor to the Army Energy Initiatives Task Force, argues that the days of renewable energy as a political football may be coming to an end, at least as far as military applications are concerned. “If you asked me ten years ago, I’d absolutely say that this is heavily influenced by who is in the White House. Nowadays, however, I am not so sure. Sustainability issues – especially surrounding the army’s Net Zero goals – are becoming integral to the military’s decision making process.”

Potts points out that with a current energy paradigm that is still overwhelmingly dominated by fossil fuels, far-reaching goals like Net Zero must be accompanied by a transitional road map of how to achieve them. That’s why the army’s Net Zero energy goals have focused initially on efficiency, conservation and “re-purposing” boiler stack exhaust, building exhausts and other thermal energy streams. Camp Lejeune, for example, has set a goal of undertaking energy audits on 25% of its facilities each year, and Fort Bragg is retrocommissioning over 300 buildings with a view to saving 25% on energy costs for barracks, and 65% for admin spaces.

Shore argues that solar hot water sits favorably with the idea of addressing low-hanging fruit first, especially when compared to more complex – and currently more expensive – technologies like solar electric (photovoltaic) installations. “The cost of photovoltaics are coming down dramatically, but right now you can generate twice the amount of energy per dollar invested through solar thermal technologies that directly heat water, as opposed to producing electricity.”

Michael Shore is open about the fact that the Camp Lejeune project is currently made viable due to federal and state tax incentives that allow FLS to recoup about 30% of the installation costs. Those incentives are only in place, however, until 2016 – and Shore argues that the industry is bringing costs down so dramatically that projects like this should be able to stand alone by the time the incentives expire. Shore also notes that a discussion of incentives and subsidies cannot be had without also addressing the way our current energy markets favor utilities and the fossil fuel industries.

The military’s embrace of clean energy is certainly being seen as a means to improve operational efficiency, reduce vulnerability and save lives. From solar backpacks for Marines in the field to better-insulated tents, the economics of clean energy look decidedly different when liquid fuels have to be tucked in by armed convoy and there are few reliable grid-based energy options.

As The Army Goes, So Goes The Country

It’s impossible to discuss the military’s push for efficiency and clean energy without also looking at what these measures mean for society as a whole. From medicine to computing to aviation to motor cars, history is littered with innovations that have been moved forward by heavy military investment and R&D. The military’s spending power alone sends a heavy message to the markets, supporting innovation and providing a powerful motivator for new products and services to be developed. Add to that the cultural significance of the army, a significance that reaches across traditional political divides, and the potential for projects like Camp Lejeune’s to ignite a broader shift to clean tech starts to become apparent.

Shore suggests that there are countless industries that could realize immediate cost savings through similar projects. “Hospitals, hotels, college dormitories, prisons – anywhere that regularly uses large amounts of hot water – is a great place to be deploying solar thermal energy like this. Through our work with Camp Lejeune, we’ve shown that utility-scale projects like this are feasible and financially worthwhile. It seems almost inevitable that other industries will sit up and take notice.”