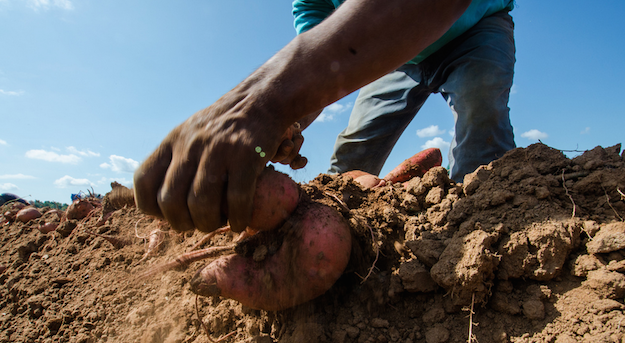 Adapting to the changing climate and the shifting seasons are part of a farmer’s daily life. But as older generations of farmers transition out of the profession, and as our food system changes hands, is the new generation prepared with the proper tools needed to create and carry on successful, financially-sustainable farms?

Tadj Schreck and Brett Evans are both young North Carolina farmers. We asked them what, if any, resources they have received to help guide them through the business side of farming.

“Young people usually want to jump into farming. There is always lots of beginning excitement. They are young and see farming as exactly what they want to do. They want to get farms established quickly, but don’t have financial resources for it,” says Schreck. She explains that farm internships are a popular option for many youth in North Carolina, and it is not uncommon for young people right out of college to take part in internships on a variety of farms. There are numerous small and medium scale operations throughout the state with ongoing training programs ranging in formality and duration, however many internships do not offer financial training and, to make matters worse, youth just out of college are often close to poor, with few assets.

Brett Evans, who graduated from college in 2012, is hoping to own a farm in North Carolina within a couple years. His dad had his own business, so he was exposed to business ideals and lessons while growing up. When he went to college, he did not take a single business class:

“I was turned off by the idea of business classes because of all the corruption in modern corporations,” explains Evans.

Evans read the popular Organic Farm Business Handbook, “a best seller for farm geeks,” he says,  “which focuses on medium scale, tractor farming.” The issue, he says, is that none of the information in this book, or elsewhere thus far, applies to the kinds of small or community-scale farms that Evans and many of his peers gravitate toward.

“For this [small] scale, a lot of the business knowledge travels by word of mouth and the pricing of items is guess work,” says Evans. “There are lots of questions in the community around food pricing. If a farmer allows a chef negotiate prices down, both the farmer and the chef are devaluing the product.”

In the realm of funding for farms, more funding opportunities exist to support mid-size and large-scale farms than small-scale farms.

“There is a lack of support from government and nonprofit agencies. It is changing, like up in the northeast, where there is support to help put new farmers on old farm land. Farm Service Agency (FSA) loans help make this happen. Programs in New England help farmers buy farmland, but requirements include having 20 acres under production and grossing $200k/year. Loans like these allow farms that have been around for decades to stick around and change ownership successfully and smoothly. There is less support for small-scale and community-scale farms,” says Schreck.

Trade farming is another model that exists for younger farmers with few financial resources.

“Trade farming entails farming on someone else’s land and doing landscape maintenance on someone else’s land. Often trade farmers work another job for 20 hours per week, plus working for the land owner, plus working on their farm. There are class differences between the owner and farmers. If there isn’t a memo of understanding, then the farms can get sold without much warning,” explains Schreck. Farmers want permanence and security, and the land owners often do not understand how devastating it is to sell the land out from under the farmer.

It is difficult to run a farm if you haven’t had previous farm experience and have never taken business or marketing classes.

“It seems that a team of people who have both a solid, well-rounded knowledge of how to run a successful farm is the key to success.” Financial training in farm internships is critical, and business knowledge is key.

“Partnerships or couples, tend to be more successful because one person doesn’t have all the traits and energy that’s needed to succeed,” says Schreck.