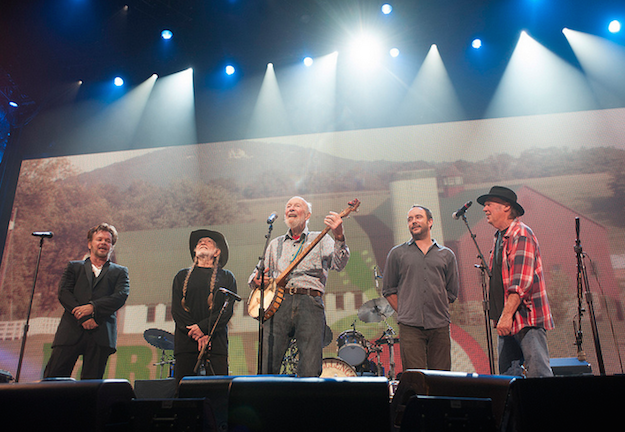 Willie Nelson and Farm Aid are on the road again, this year in Raleigh’s backyard at Walnut Creek Amphitheater, on Saturday, September 13.

It’s been almost 30 years since the original concert in Champaign, Illinois, where Nelson and more than 50 artists performed to raise awareness about family farms struggling to keep their land while combating a devastating economy and the rising threat of factory farms. Since 1985, Farm Aid has raised more than $45 million to promote the livelihoods of family farmers, provide resources and counseling to farms in crisis, and advocate for policies supporting a just and sustainable food system.

In North Carolina, where agriculture makes up more than a quarter of the state’s land area and accounts for 18% of the economy, the Farm Aid mission is still relevant. USDA statistics indicate the state has lost 15% of its farms since 1997.

A number of NC-based farm advocacy groups have received financial support from Farm Aid over the years; more than $600,000 has been granted to RAFI-USA, Land Loss Prevention Project, and six other organizations in the state since 1985. One project beneficiary, RAFI-USA’s Farmer Advocacy Program offers financial advice, training, and disaster assistance to farmers at risk of losing their land. RAFI-USA Executive Director Scott Marlow estimates the program works with 50 to 75 farmers every year (sometimes more) and many have been referred through Farm Aid’s crisis hotline.

North Carolina is still the number one tobacco-producing state, and Marlow says its biggest challenge remains finding sustainable and profitable options for transitioning farms, and reinvesting in farm entrepreneurs. “Who is going to farm? How are we going to farm? It’s an exciting moment for Farm Aid to come, because we’re right on the edge of these issues and seeing which direction agriculture is heading in the future.”