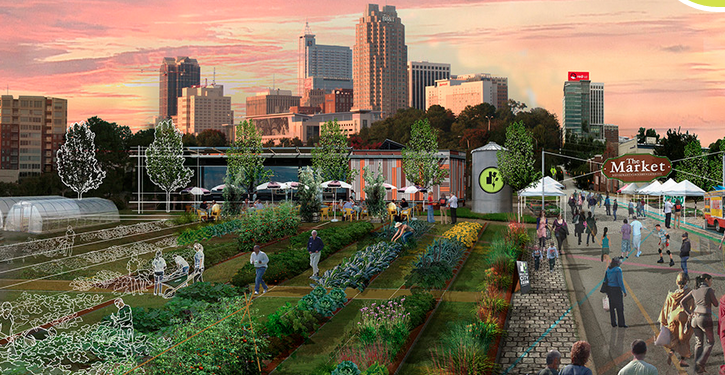 From community garden to growers cooperative
Raleigh City Farm started in 2010, when a group of people passionate about urban farming came together to figure out how to create a farm in downtown Raleigh. In Spring of 2012, they gained access to a highly visible, one acre lot on the corner of Blount and Franklin St. and established Raleigh City Farm (RCF) as a non-profit. Beginning as an all-volunteer organization, Raleigh City Farm managed to grow thousands of pounds of organic produce, much of which was donated to local food banks. Although allowing community-supporters an opportunity to get their hands dirty and learn about sustainable agriculture is still central to its mission, RCF now serves as a growers cooperative as well, offering co-location, co-working and co-marketing to a handful of Raleigh-based farm entrepreneurs. RCF and the local community supports these farmers as they develop and execute creative business models that could make small-scale, sustainable agriculture more financially feasible.

The one acre lot now serves as production space for Kailyard Farm, selling seasonal diversified vegetable and Endless Sun Produce, selling year-round hydroponic lettuce. Understory Farm will soon be adding year-round oyster mushrooms to the mix. Thanks to a membership agreement, a percentage of mushroom and vegetable sales from these farms go towards RCF’s operating budget. Christopher Rumbley, president and CEO of Raleigh City Farm, believes structuring incentives in a way that motivates everyone involved is key to building a sustainable local food system. Having skilled, market farmers using the land, whose livelihoods depend on selling high quality produce, ensures a level of commitment not often found amongst volunteers. And allowing RCF to earn a share of these farmers’ revenues further incentivizes RCF to build community support for local farmers. 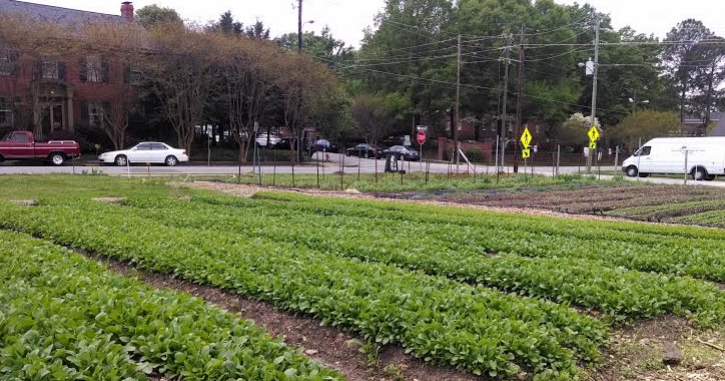 Community supported farmers
This community support takes many forms. One of RCF’s primary goals is to grow demand for Raleigh-grown fruits and vegetables. Thirteen local restaurants regularly purchase products from RCF’s farmers, and that list continues to grow. Four different restaurants have plans to visit the farm in the next month, and these visits give chefs a chance to learn more about how food is grown and what the advantages are to using what is in-season locally. Raleigh residents can also stop by the on-farm farm stand to purchase products from RCF farmers, as well as other farmers in the Raleigh area.

But the community doesn’t just support these farmers by purchasing their vegetables . Sean Barker of Kailyard Farm is quick to point out that he would have much less land under cultivation this year had it not been for the hard work of a number of community-supporters, some of whom simply walk past the site and offer to lend a hand.

Farming on a short lease
Operating a financially viable small-scale farm is challenging anywhere, but it is especially so in urban areas, where economic pressures make it almost impossible to secure long-term land tenancy for agricultural uses. In some cases, developers have allowed community members to garden vacant lots in tough economic times, and then received push back when the real estate market recovers and they try and level the garden to make way for a building. This has lead to developers keeping gardens out of vacant lots, despite having no near-term plans to use the land for other purposes.

Raleigh City Farm has no intention of fighting for urban farm land in this way. It strives to be the type of tenant that developers will be excited to work with. Rumbley is upfront about the fact that the developer gave RCF a ten year lease on their acre and, once that lease is up, it will be up to the developer to decide on the lands’ highest use. This is part of why the community support is so important.

“You can’t ask a farmer to invest a ton of time and capital into land that he or she may not have access to a decade from now, so the community that wants to see the land farmed needs to cover a fair share of the infrastructure cost and absorb some of the risk,” Rumbley explains.

When RCF’s lease is up, the farmers with proven business models may be able to offer the developer enough rent to keep the land in agricultural use, or they may need to relocate to somewhere nearby. Either way, the relationships these farm entrepreneurs form with local residents and restaurants will live on. 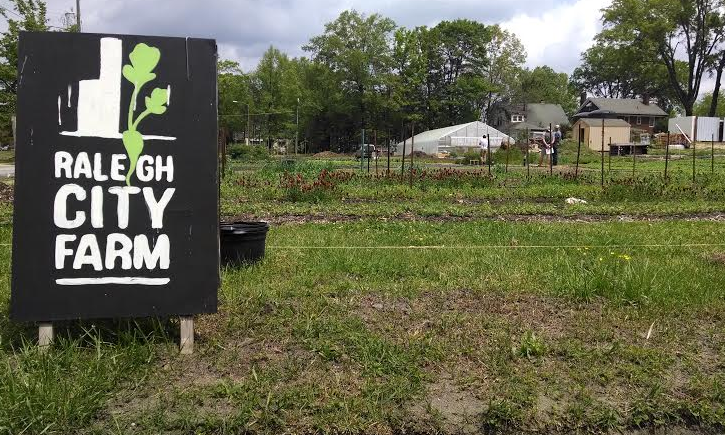 Rethinking the value of farmland
In the past, real estate developers have seen agriculture as one of the lowest uses of land. In the last half a century, huge amounts of farmland was converted into suburban housing developments. But now developers are starting to rethink the value of farms. Across the country, developers are beginning to build new housing subdivisions around community farms, instead of pools or a golf courses. Having farms as part of a neighborhood has positive economic, social, health and ecological benefits.

In urban areas, no single developer stands to gain from a neighborhood farm. These benefits will be shared across the patchwork of renters, homeowners and developers invested in the area. A community-supported growers cooperative offers new and young farm entrepreneurs a chance to demonstrate the value they add to a community. Once a farmer is woven into the fabric of a community, the community can offer additional land, financial assistance or even help weeding in order to ensure that the farmer remains a part of of the neighborhood.

Unlike technology incubators, which regularly force their tenants out to make room for new entrepreneurs, RCF aims to help its tenants root themselves in the local community. Rather than forcing successful farmers on the Blount St. site to uproot, Rumbley would rather see RCF eventually move to another part of the city that wants to develop a closer relationship with where its food comes from.

Raleigh City Farm’s model is still a work in progress and there are still plenty of kinks to work out, but it may well pioneer a strategy that local food advocates everywhere could use to help create space for sustainable farms in urban landscapes. Once a community demonstrates that it values having farmers be a part of the neighborhood, developers in the area will see sustainable agriculture as one of the highest uses that land can have.