Jon Clift is a graduate of Duke’s Nicholas School of the Environment, where he studied the interrelationship between the textile industry and the State’s water resources. In the part one of this two-part series on this issue for NCSC, Jon explored the interrelationship between the textiles industry and water resources from a historical perspective. In part two, he looks at how this issue will shape the future of textiles in North Carolina in an age of climate change and population growth. An in-depth and complete discussion of his findings can be found in “North Carolina’s Textile Complex: Water Risks and Opportunities”.

A Primer on Water Challenges

In the 1980s and 90s, North Carolina’s textile industry was faced with a major challenge: tackling the toxicity of its process water.

The costs were potentially astronomical, and the stakes were extremely high. But the industry forged a successful, community-based solution of stakeholder engagement. Lessons from that era may become crucially important in the coming years, as the textile industry navigates a new challenge – the availability of fresh water in the face of climate change and population growth.

Although we don’t clearly understand what a changing climate means for our water resources, a new sense of volatility is highly likely. This volatility may include modification of the seasonal variation of available fresh water, degradation of water quality, and more intense and intermittent precipitation that increase the risks of floods and droughts. (For a more in-depth discussion see Global Hydrological Cycles and World Water Resources in Science by Taikan Oki and Shinjiro Kanae.)

The threat of droughts may seem like a hard sell this year. After all, we are experiencing what many longtime North Carolinians refer to as the wettest year they can remember – and in a state that is generally assumed to be water rich already.

The lack of attention given to mitigating water based business risks is a broad trend nationally, and even among businesses which recognize the problem in theory.

Reducing Risks and Driving Business Value CDP Supply Chain Report 2012-2013, written by Accenture for the Carbon Disclosure Project, noted that while 50% of firms studied ranked water based risks in the supply chain as high or medium, only a quarter of those firms were engaged in work to identify and mitigate those risks.

Yet these are real risks to consider. 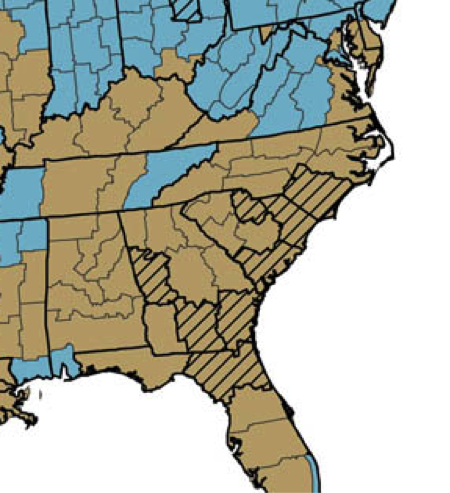 Trends in North Carolina point to increased periods of drought according to the EPA.

Even if we take climate change out of the discussion, we have to consider population growth and increased demand.

According to a 2009 report by the North Carolina Department of Environment and Natural Resources, the population has grown 38% from the late 1990’s to the late 2000’s, while growth in available water supply hasn’t even been close.

If the hydrologic cycle becomes more volatile, and the demand for water increases, doesn’t it seem likely that water is sure to pose challenges to textile concerns where a clean, and reliable water supply is the lifeblood of its operations?

Identifying a path forward for responsible water management relies on a crucial realization: the industry is characterized by an astonishing sense of heterogeneity.

After all, water is an intensely local issue.

Firms have different cultures, produce different products, have differing competing projects, have a different cost of capital, use different chemicals, have different equipment, receive water from different sources, send their wastewater to different places, etc. We must be mindful of the unique conditions of firms and the water resources they depend on. With this in mind, blindly broadcasting and recommending specific technical processes to the industry as a whole doesn’t seem helpful.

The real opportunity rests in a language that isn’t foreign to the industry: Stakeholder Engagement. But what would this look like in reality?

We’re fortunate. The industry has done it before.

Susan Manring and Samuel Moore explained in a 2006 article how the industry solved toxicity challenges through stakeholder engagement.

The story goes like this: Through the 1980’s and 1990’s a large portion of wastewater from publicly owned treatment works (POTW) was found to be acutely toxic based on new testing standards. At that point in time, over 50% of water being treated in POTW in North Carolina was coming from textile operations.

Estimates of costs for improvements of treatment works themselves were in the millions of dollars. Another solution had to be found. That solution was stakeholder engagement with a common purpose: to alleviate the toxicity issues. And an overall goal: a favorable outcome for all involved. A successful network of stakeholders was developed and the end result of their actions was reduced toxicity by optimizing pollutants out of the textile processes.

Unfortunately these networks seem to be dissolved, but no matter the reason, this precedent should give us hope that the industry is capable of engaging as stakeholders in local water management.

My research, freely accessible, outlines a strategic, process-based approach for textile firms to take when engaging in water policy. Much of the approach presented comes from striving to distill information from a global report, The CEO Water Mandate: Guide to Responsible Business Engagement with Water Policy, and relate it to North Carolina textile firms and their vernacular.

The essentials of the approach include Core Principles and an Operational Framework. The principles call for advancing sustainable water management, respecting public and private roles, striving for inclusiveness, and being pragmatic, accountable and transparent. The Operational Framework rests on the foundation provided by the principles and calls for assessing the context, and preparing for action.

The takeaway is to develop a nuanced understanding of the issues the firm faces and move forward with a tailored strategy based on this understanding. It requires proceeding proactively and provides opportunities that an internal focus cannot. The end goal is mitigating risks for not only the business but also the communities and the Old North State they call home.

It will require the revival of a language from the past, but with new goals and new tools it seems possible. Perhaps such an approach can ensure the viability of North Carolina’s textile firms, helping them maintain, in some cases reestablish, their status as critical driving forces for North Carolina’s identity and economy.

Trends, concerning environmental scrutiny abroad and increasing prices in other regions of the world, indicate that textiles may return to North Carolina, finding it worthwhile to operate in a well-regulated environment. I’m hopeful that these notions combined, point to what might be a prosperous, and sustainable future for North Carolina’s Textile Complex.