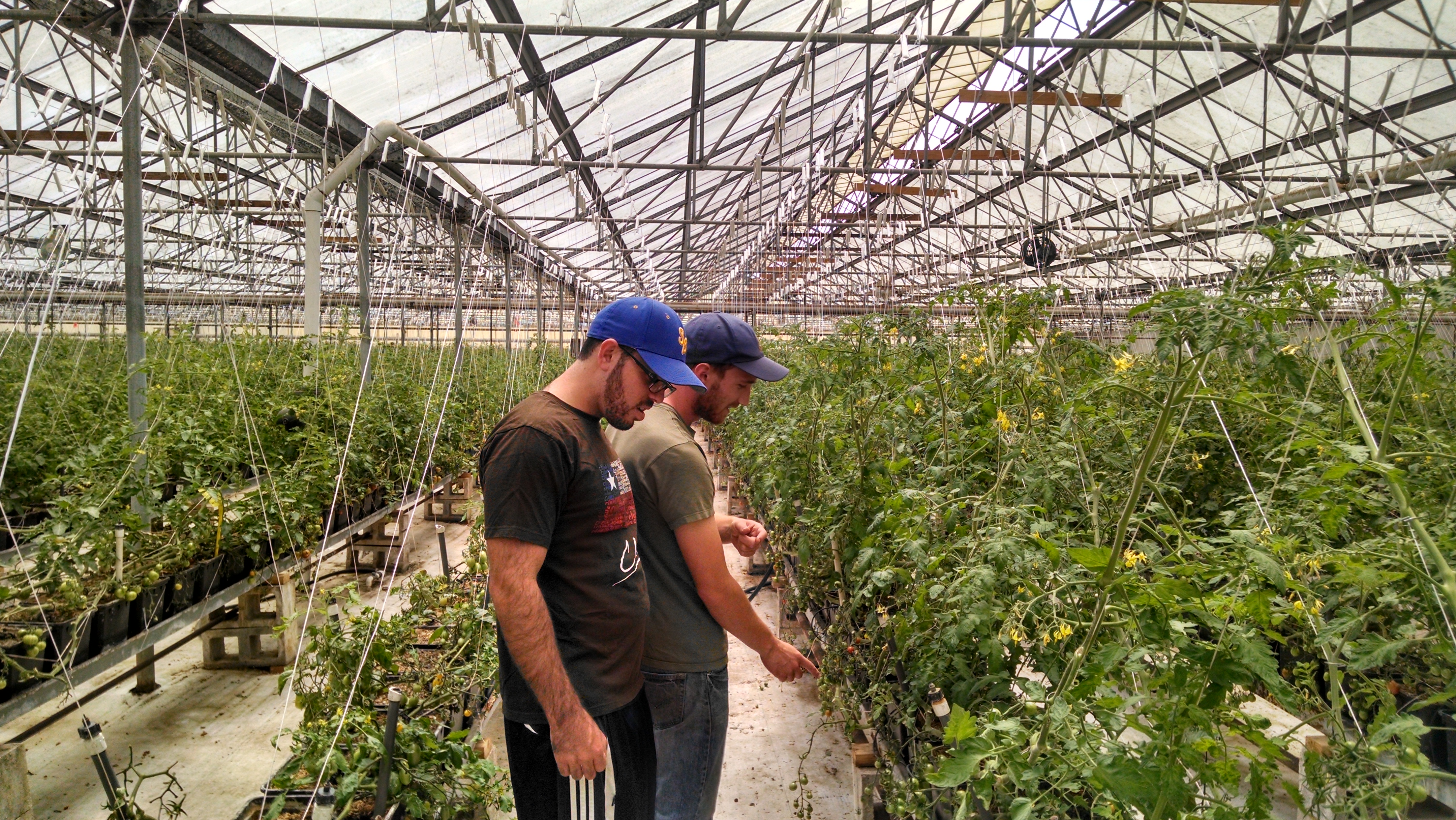 Part one of this article explains why competition over water is becoming fierce in North Carolina. The following article looks at some of the innovative techniques that people living in water scarce regions are developing to make the best possible use of this precious, life-giving resource.

Although a severe drought may seem like a plague, scarcity leads to incredible innovation. Out west and in water-scarce regions around the world, humans are developing ways of farming and living that do not allow a single drop of water to go to waste.

California farmers send their fruits, nuts, vegetables, dairy and livestock all around the world. The $45 billion agriculture industry accounts for 80% of human water use in the state. The severe drought, now in its fourth year, is making it impossible to farm like they used to. Farmers are trading sprinklers for drip tape, but more effective irrigation techniques are often not enough.

In the fertile San Joaquin Valley, many farmers are rushing to dig deeper wells, sinking the water table at an alarming rate. Since 1962, over pumping has depleted groundwater reserves by about 80 million acre-feet, and the rate of depletion has spiked in recent years. No one believes this is a sustainable solution, but California does not regulate groundwater pumping and many farmers are desperate to keep high-value orchards alive. In the last few decades, profit-seeking investors have shifted agricultural lands from annual crops and ranching towards more profitable nuts and fruits, which cannot be fallowed in dry years. This has contributed to the most intense competition over water resources in the state’s history.

“The drought is forcing farmers to prioritize their crops, to cut acreage, but most importantly it’s forcing them to innovate,” explains Nathan Kaufman of Viridis Aquaponic Growers. “The drought is quickly eliminating wasteful techniques like flood irrigating, and creating booming new opportunities for conservation practices.”

Viridis grows tomatoes, lettuce and cucumbers all year round using aquaponic and hydroponic growing methods. This allows them to use 5% as much water as conventional growers. Much of the nutrients their plants need comes from their fish tanks, filled with sturgeon and catfish.

Restauranteurs Karen Leibowitz and Anthony Mint recently tapped Kaufman’s water-tight growing skills for their new restaurant venture, the Perennial. The restaurant will feature the most sustainably sourced ingredients as possible, from carbon-negative beef to perennial wheat. Kaufman is building an aquaponic greenhouse just a few miles away from the restaurant, which will supply much of the produce the restaurant needs, giving the restaurant an incredibly low food and fuel footprint.

The drought has spurred a huge amount of interest in aquaponics, but not all water-wise farming techniques are as high tech. Many farmers across the west are reviving the art of dry farming, growing crops without any irrigation. Dry farming can be risky, and farmers need to take steps to allow rain to penetrate deeply and keep moisture from escaping. It tends to lead to a decrease in overall yield, but the results can be delicious. Advocates claim that dry faming results in much tastier fruits, and some of the best wine in California comes from dry farmed grapes.

Not all crops are suitable to grow without irrigation, and the drought is forcing many western farmers to move towards less water-intensive crops. However, some farmers have developed techniques that allow water-intensive crops to thrive without irrigation. In the 1950’s, P.A. Yeomans developed the Keyline design system to help the arid Australian landscape support more life. Holding water at key points on a lands slope and then ploughing on contour brings water from wetter valleys to drier ridges and increases how much rain can seep into the landscape.

Permaculture instructors have taught keyline design in the American west since the 80’s, and many farmers have taken note. In San Gregario, California, Merkegard Family Grass Fed use keyline design to grow more forage for their pasture-raised animals. When Wisconsin experienced a bad drought that wiped out the corn crop, Mark Shepard’s well designed keyline system ensured that New Forest Farm’s 250,000 fruit and nut trees were fine.The twenty-year-old permaculture farm can already out-yield conventionally grown corn by 30% on calories per acre. When it reaches  maturity, Shepard predicts it will be capable of supporting 100 cattle, 200 hogs, 200 sheep and thousands of turkeys and chickens.

Other farmers have drought proofed their land by building topsoil. The added organic matter increases water penetration and retention. Singing Frogs Farm in Sebastapoll, California, uses a no-till technique to add topsoil at a dizzying rate. He’s cut his irrigation by half since he stopped tilling.

Researchers studying soil microorganisms have discovered a number of beneficial microbes that help plants thrive with less water. Seattle based Adaptive Symbiotic Technologies found a fungus in Yellowstone National Park that increases crop yields in drought conditions, and have begun marketing it in their BioEnsure product line.

At times, farmers are so desperate for water that they irrigate with salty, mineral rich water. So far, the world has lost around 62 million hectares, an area roughly the size of France, to soil salinization. Fortunately, this is no longer enough to keep people from growing food. Researchers have developed a type of potato that is four times more salt tolerant than normal.The International Center for Biosaline Agriculture is working to develop salt-tolerant barley, triticale, beets, millet, sorghum, safflower and quinoa seeds.

Farmers are beginning to implement these new water-wise innovations, but it will still be a long time before they are widespread. In the meantime, the ongoing drought will cause food prices to rise, and could create opportunities for farmers in other regions to offer local alternatives to California-grown products. Rising fuel prices and customer demand are forcing food systems to localize. As great as local food is for the local economy, it could put additional pressure on already scarce water resources in North Carolina. Learning from farmers out west could help our state avoid the kinds of arguments over water use that farmers and urban dwellers in California are currently navigating.

Governor Jerry Brown has called for mandatory water restriction, forcing municipalities to cut water usage by 25%. It is up to each municipality to decide what to cut. In most areas, green lawns are first to go. Outdoor irrigation makes up 44% of water use in California’s urban and suburban communities.

Still, many people are passionate about keeping their lawns looking nice. Some take the old fashioned approach of planting drought-tolerant plants, but others look to technology for a solution. The tech sector has already developed a number of new smart sprinkler systems, like Rachio and Skydrop, which use Wi-Fi connections to monitor weather conditions and only water when necessary.

Households can use much less water if they store and recycle it. Many people have installed greywater systems that allow them to send certain types of waste water into the yard, where a constructed wetland helps to filter it. Since 2007, Greywater Action has taught people how to design safe and effective greywater systems, rainwater catchment and composting toilets. The organization also works with policy makers to regulate these systems in ways that conserve water and avoid public health scares.

Using well-designed water management and catchement systems, designs of which are available for free online, allows households to become better citizens of their local watersheds. Slowing, spreading and sinking water into the landscape recharges aquifers, allows sediment to settle out of the water and ensures a more continuous flow for all of the creatures down stream.

The Occidental Arts and Ecology Center’s Water Institute has been working with watersheds in Northern California for years, helping river basins act collectively to design and implement ‘conservation hydrology.’ They have worked with residents and institutions along five Russian River tributaries to harvest rainwater and restore streamflow, recovering habitat that is vital for the survival of the endangered coho salmon.

Yet, as hard as founder Brock Doleman has worked to improve local watersheds, he would be the first to admit that humans will never be as good stewards as beavers. Beaver dams are responsible for much of America’s fertile soils. The dams filter out sediment, improving water quality for all creatures downstream. The ponds they build have deep channels, ensuring that water stays on the landscape even in extreme drought. Seeing how much healthier land is around a beaver pond, many ranchers have begun to seek out beavers to serve as hydrologic engineers on their land.

The Water Institute started a campaign in 2009 to Bring Back the Beaver. Recent research confirms that the dams beavers build are critically important to spawning salmon as well as a number of other at-risk species. The beaver’s incredible stewardship abilities give humans something to aspire to.

Water is not yet scarce enough to force North Carolinian’s ways of farming and living to change as quickly as they are changing out west. But dry times will come again, and competition over water resources will become increasingly fierce.

It is never too soon to learn from water-wise innovators and start treating water as the precious, life-giving resource it is.