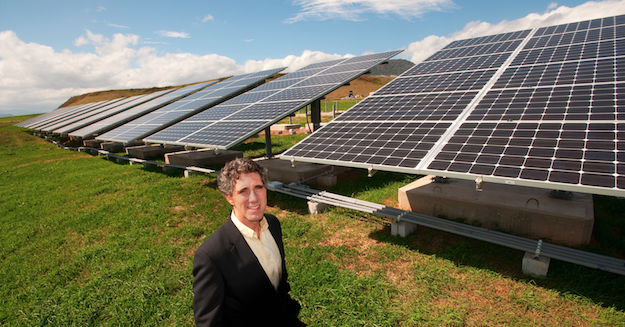 At the 2013 NCSEA Making Energy Work Conference, Michael Shore was honored with a lifetime achievement award – and for good reason. A co-founder and former CEO of Asheville-based FLS Energy, Michael has helped develop some of the state’s most high profile solar installations – including the major solar surge at Camp Lejeune.  He was also influential in the drafting of North Carolina’s Renewable Portfolio Standard, played a lead role in development of our state’s landmark Clean Smokestacks Act and was a founding board member of NC Green Power.

We got on the phone with him to talk about some of the dramatic changes that are happening in the energy industry – in North Carolina and beyond.

When you were awarded the NCSEA lifetime achievement award, in your acceptance speech you spoke about the disruptive influence that the clean energy industry is having on the energy sector. How is that influence manifesting itself?

I’ve been working on clean energy for a long time. We’ve had to work really hard to be taken seriously in the conversations about the future of energy. I was at an NCSEA event recently and Peter Kind was there. He’s the author of Disruptive Challenges, a report that was written for the utilities and the Edison Institute. There seems little doubt that entire business models are going to have to adapt.

Utilities have been around for a long time – they’ve had a monopoly. And that may have been the right structure to have when electrification was new. But things have changed. Clean energy has become more viable. There’s more and more distributed power. Utilities need to operate according to this new reality.

If I was running a major utility, I’d be looking at how we can move way beyond compliance in terms of green energy –  and instead forge a position based on innovation and leadership.  Solar is going to play an increasingly important role as to where our energy comes from, and the financial models for how companies get compensated for developing infrastructure are also going to change.

Hanging on to the old business model for utilities may be profitable in the short run, but in the long run they will be losers unless they step up.

How does clean energy become competitive with the big incumbents in the energy sector?

The most important factor is simply to scale up.   Economies of scale in the solar industry have brought down costs, created thousands of jobs in our state, and moved solar on a path toward grid parity.

Secondly, our financial markets have become increasingly confident in solar as an investment – the cost of capital is coming down year after year as investors appreciate the true risks of solar, which are much lower than nuclear and fossil fuels.

Finally, we’ve seen a maturing of the industry’s capabilities.  There are many companies now who know how to engineer, construct and manage solar assets at scale.  We have replicable models for success – and that’s something we simply didn’t have when Senate Bill 3 was signed into law six years ago.

You’ve got more than 2 decades of experience working on clean energy. What changes have you seen during that time?

The changes have been profound. Two decades ago, we did not fully appreciate the threat of climate change. Now that’s a driving force in our economy and energy policy. Two decades ago, it seemed that the established utility model exercised a permanent hegemony over how energy was generated and delivered. Even five years ago, the vast solar farms we are seeing installed in North Carolina were simply inconceivable.

All that is changing. The solar age has dawned.

With tax credits set to expire in 2015, what comes next for clean energy in NC?

When we were first developing PV projects, they were priced at more than $8 a watt. Because of scaling up and experience in the sector, we are now developing projects at much less than $2 a watt. The tax credits were designed to help the industry scale up, and it is doing just that.

As the state tax credits roll off after 2015, and federal incentives roll off a year later, I anticipate that many solar companies will be well positioned to continue what they are doing now. Not all the companies will weather that transition, but the best ones who are efficient and focused will bring the industry to grid parity in our state.

Not only is this possible, but I think it’s our job. Unlike the fossil fuel industry which seems permanently addicted to big subsidies, the solar sector will eventually wean itself from government incentives in the coming years.

There’s been much talk of reforming the regulations to allow third party sales, where an energy company might install solar on rooftops but maintain ownership – selling the power to the end user rather than selling the system itself. Would that kind of reform help the clean energy industry?

Sure, third party sales are an important factor, but they are not paramount.

The structure of energy markets and utilities in the United States is changing, so the time has come to allow third party sales – at least for solar projects.

Sometimes it is not efficient or good for the customers or the rate payers for all energy transactions to go through a utility company.   The lessons of capitalism and an efficient economy teach us that we should move towards a free market when possible. Such policy is something that all political parties should be able to get behind.

As a founding member of NC GreenPower, you’ve encouraged new ways for businesses and individuals to get behind clean energy. Why is that so important, and what can we all do to accelerate change in the energy sector – besides putting solar panels on our houses?

It is like a prototype of crowd funding. Not everyone can put solar on her or her roof, and NC GreenPower provides a pathway to get involved in the clean energy transformation.

You recently stepped down from your position as CEO of FLS Energy. What comes next for Michael Shore?

[laughs] I probably should take a longer break than I actually will.

I have several ideas for new businesses.   I am also talking with a couple of great clean tech start up companies that could benefit from my experience. Whatever I do, I will definitely stay in the clean energy sector and work toward the sustainability of our economy and planet.