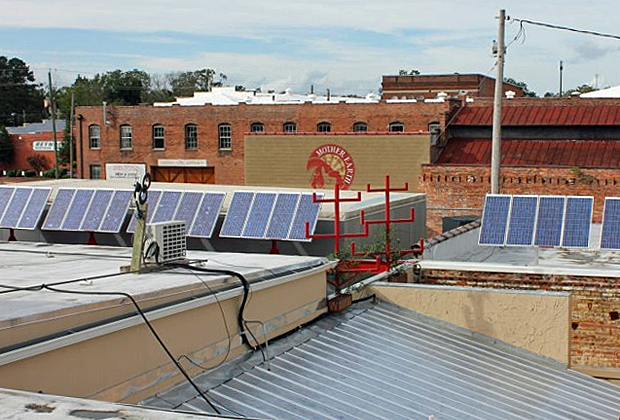 Asheville, NC may be known as “Beer City USA” but across the state, in tiny Kinston, Mother Earth Brewing is making its mark on the craft beer industry—and on eastern North Carolina.  In an area of the state hard hit by losses in other sectors, Mother Earth Brewing is growing rapidly.  Sales doubled in the past year, and the company is expanding its product line with the construction of a new craft distillery.  And, it’s doing it all with deep-seated conviction that what’s good for business can also be good for the environment.

Stephen Hill and his son-in-law Trent Mooring opened Mother Earth Brewing in 2009. “Kinston is where we were both born and bred, where our families live,” Hill said.  “We wanted to give back to the community.”

In a renovated brick building in downtown Kinston, Hill and Mooring have built a brewery so eco-friendly it will soon be the first brewery in the nation to earn the prestigious Gold-level LEED certification (Leadership in Energy and Environmental Design) from the U.S. Green Building Council.  The walls of the brewery are lined with insulation made from recycled denim and painted with low-VOC paints, and the facility’s toilets and faucets are all water-saving. The building holds a six-kilowatt solar photovoltaic array on the rooftop which powers the tap room. Rainwater is captured and used to irrigate outdoor greenery.

The building’s forthcoming distillery room will include a solar water heater to help heat the roughly 1,200 gallons of water utilized per day in the brewing process, and recycled wood from old beer barrels will line the distillery ceiling.

Beyond the facility itself, Hill and Mooring try to push consideration of sustainability into everything the company does.  “If we could buy grain that was local or bottles that were local, that is what we would do,” Hill said. “Our boxes are made here in NC. We make the best product that we possibly can with the smallest footprint.  You have to constantly stay on top of what you are doing to make sure that happens.” The company sends spent grain from the brewing process to local farmers for livestock feed, saving 240,000 pounds of waste from the landfill each year. And at bars and restaurants that serve their beer, you can find the Mother Earth logo on specialty tap handles made from sustainably sourced bamboo.

With a brand name like Mother Earth, the company and its slogan “Peace, Love & Beer” attract both customers and employees who support the company’s sustainability efforts.  Josh D. Brewer, the company’s (aptly named) head brewer, doesn’t own a car. He rides his bike to work every day, as do several other of the 12 staff members. The rest either carpool or walk.

Fortunately for the craft beer-loving and environmentally-inclined, Mother Earth Brewing is earning recognition for its beers as well as its sustainability practices.  In 2011, the company won three medals at the U.S. Open Beer Championships.