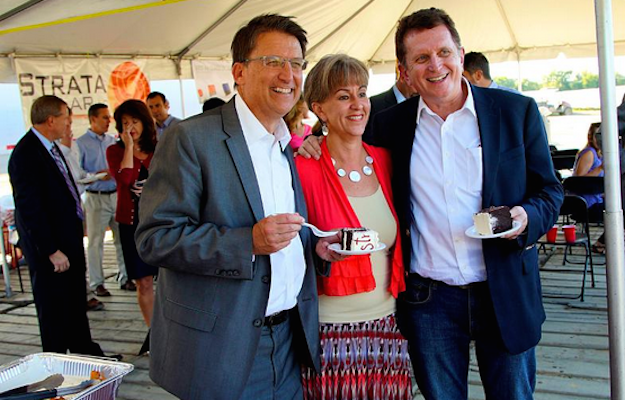 On October 14th, legislators, community leaders, solar farm landowners and industry representatives gathered at a solar farm in Sampson County to celebrate one company’s major clean energy milestone. Strata Solar was announcing it has passed $1 billion in project investments in North Carolina solar since the company was founded in 2009. Whether it’s the USDA investing $55 million in NC solar farms or Duke Energy committing to a huge increase in its solar capacity, solar power in North Carolina appears to be on a winning streak right now. (NC has been near the top of national rankings for installed solar capacity in recent years.) So it’s little surprise that Chapel Hill-based Strata Solar has been investing big money in the Tar Heel State in recent years.

For clean energy advocates, announcements like these are worth paying attention to. Not only do they demonstrate the rapid advance of clean energy as a significant contributor to our power supply, but they are also a sign of the growing economic and political clout of low carbon industries. Here’s more from the Strata press release:

“This is a really big day for Strata Solar, a company that started as a family business serving its local community. We had big dreams and wanted to make a difference in our local environment and here we are today, celebrating 1 Billion dollars’ worth of investment with utility scale projects across our entire state.” said Markus Wilhelm, Co-Founder and CEO of Strata Solar.

Among the keynote speakers were Governor Pat McCrory, Rep. William Brisson and Senator Brent Jackson. The event took place at the Anderson Solar Facility in Roseboro, NC which is the political district for both Rep. Brisson and Sen. Jackson. The speakers reflected on the overall importance of the solar industry, the positive impact it has had on employment, the importance of both the local investment and the environmental benefits.