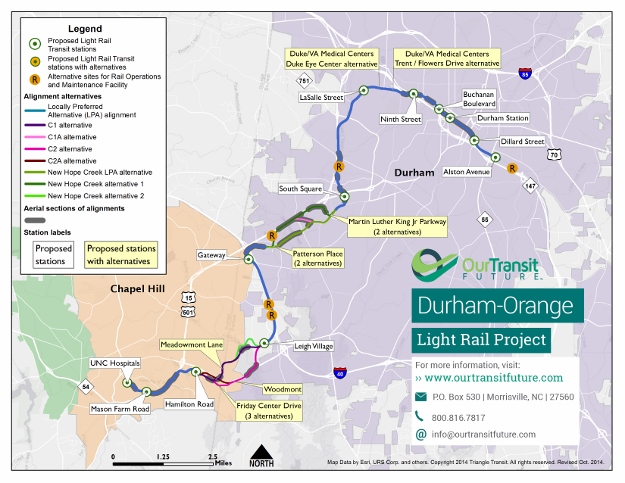 The state will help fund construction of the Durham and Chapel Hill light rail, according to a draft of the NC Department of Transportation’s construction subsidy plan released earlier this month.

Support from Governor Pat McCrory and the NC DOT is welcome news for backers of the 17-mile light rail project, which will span from Alston Avenue in Durham to UNC Hospital in Chapel Hill. The project, slated to cost between $1.34 and 1.8 billion, will also receive local funding through a half cent sales tax in Durham and Orange Counties.

Covering ten fiscal years, the plan was developed using a new ranking framework established by NC DOT, the governor, and state legislators in 2013. McCrory, who championed light rail as mayor in Charlotte, has argued for the importance of subsidizing not only roads but also mass transit and other forms of transportation. The Governor’s 25-Year Vision for North Carolina identifies expansion of mass transit as a priority to address growth and increasing congestion in the central region of the state.

The draft will be open for public comment before the DOT submits it for approval from the state Board of Transportation next summer. If it passes, the rail project would start to receive funding in fiscal year 2017-18.