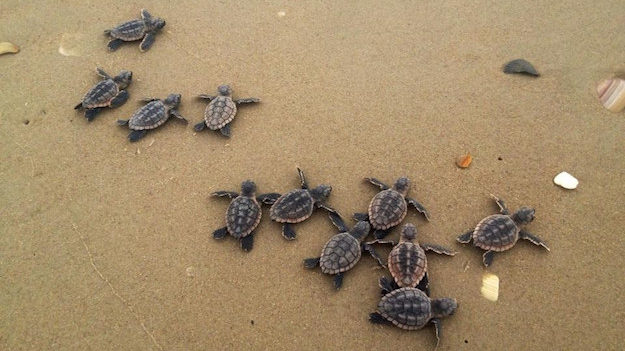 The Cape Hatteras National Seashore is a prime nesting spot for both loggerhead and green sea turtles, threatened species that only return to the shore after years at sea to lay their eggs. That’s why conservationists are celebrating the news that a record number of turtle nests have been found this season, as reported by WRAL:

The Virginian-Pilot reports that 269 nests have so far been spotted, 15 more than a record set two years ago for that stretch of the Outer Banks. All but nine of the federal seashore’s nests belong to loggerheads, a threatened species in the U.S. The other nests are of green sea turtles, also listed as threatened. The nesting season began in May, and females are still coming ashore to lay their eggs, which hatch about 60 days later. Across the North Carolina coast, 1,179 nests had been recorded as of Tuesday, short of 2013’s state record of 1,304.

Scientists are not yet sure why so many nests are being found, but environmentalists have previously pointed to rules restricting beach driving as a key factor in protecting turtles and other species.