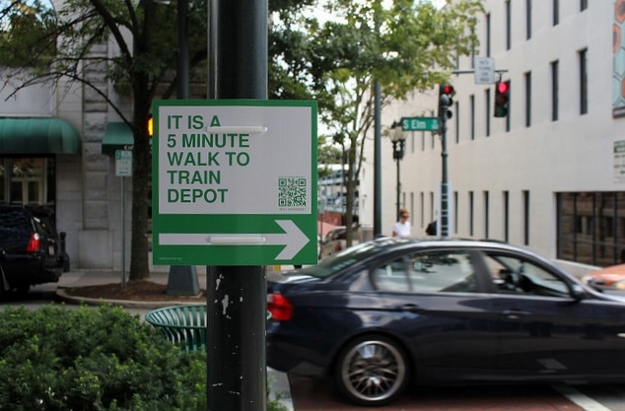 On a January morning in 2012, Raleigh residents awoke to find 27 signs posted at three intersections in the city, noting “minutes by foot” distances to various public locations around town.

The stunt, an installation intended to promote healthy and walkable communities, was coined “guerilla wayfinding.” It received national and international media attention as a successful example of tactical urbanism, civic interventions to improve the urban environment. The unsanctioned signs were taken down within a few days and then unanimously approved by the city for reinstatement as an educational pilot program.

With funding from Kickstarter and Blue Cross Blue Shield NC, the group behind the project has since developed an online sign-building platform called Walk [Your City]. It’s a tool for both rural and urban communities to encourage walking and biking in their cities and to provoke thoughtful exploration of public space. Citizens interested in piloting a campaign can use the resource to generate, print, and install signage in their own communities. The project has been implemented in locales across NC, as well as in Kentucky, New Mexico, Georgia, South Carolina, Rhode Island, and West Virginia.