What is it with beer and bikes? There’s something about the combination of person-powered transportation and a cold, frothy brew that seems like a match made in heaven.

Crank Arm Brewing is a craft brewery and tasting room in the warehouse district of Raleigh, North Carolina. The brewery focuses on green transportation, by way of a custom designed keg-delivering rickshaw. Bikes are woven throughout Crank Arm’s culture. The names of the artisan beers say it all: Rickshaw Rye IPA, Whitewall Wit, Uphill Climb, Reflector Red. If their Facebook page is anything to go by, the brewery is a popular hangout spot for Raleigh’s lycra-clad beer heads.

Michael Morris, Adam Eckhardt and Dylan Selinger founded Crank Arm Brewing in the summer of 2013, having operated a rickshaw company under the same name for some time. In order to raise funds for some of the equipment needed, the team turned to crowdfunding site KickStarter (video below), exceeding their initial goals by over $7,000. 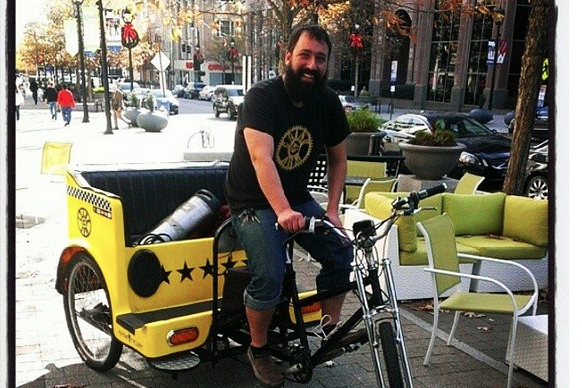