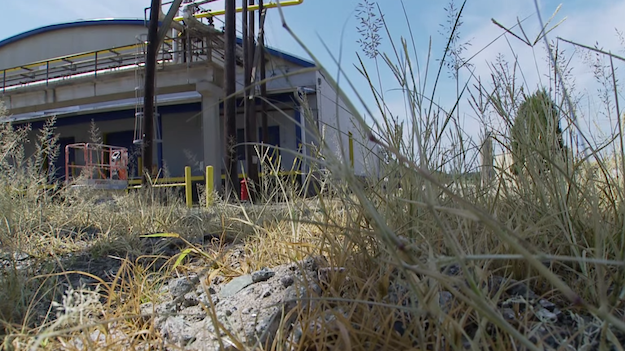 Across the Southeast, manufacturing sites with industrial infrastructure capable of enormous productive potential sit unused and idol. These sites are the garbage piles that manufacturing left behind when corporations moved their operations overseas, to places with less stringent labour and environmental regulations. But Tom McKittrick, founder and President of Forsite Development, doesn’t believe in trash. With the help of a number of partners, Forsite Development took an abandoned, badly polluted, textile-dye manufacturing plant near Mount Holly and turned it into an eco-industrial park that has already become a hub for green-color jobs.

In August, McKittrick unveiled ReVenture Park, and received an award for “Excellence in Site Reuse” from the Environmental Protection Agency (EPA). In his acceptance speech he noted, “Developing an Eco-Industrial Park on a shuttered industrial complex is an opportunity where the private sector, public policy and environmental interests align to promote the clean energy economy. We are transforming this liability into an asset – the essence of recycling.”

HISTORY OF THE PLANT
The problem with garbage is that hazards and treasures are mixed together, and separating them is hard work. Though the Mecklenburg County dye factory boasted impressive industrial infrastructure and beautiful views of the Catawba River, previous tenants had left toxic landfills that were serious environmental hazards. Industrial dye manufacturing processes often produces chemical waste products, and figuring out what to do with the hazardous byproducts has always proven challenging. When the factory was built in the 1930’s, Dyestuff Company took advantage of an absence of environmental regulation and dumped waste products right into the Catawba river, regularly dyeing the waters unnatural colors.

As environmental regulation became stricter, the plants’ tenants began storing waste in on-site landfills. This contained the problem until October 1980, when Martin Marietta Sodyeco reported that chemicals had seeped into the groundwater, and nearby creaks contained dangerous concentrations of toxic chemicals. The corporation fixed the leak, and bought up contaminated neighboring properties, but the landfills had become a serious liability. At the end of 1982, the Environmental Protection Agency declared the facility one of the most hazardous sites in the Southeast, and added it to the Superfund National Priorities List.

When Clariant Corporation purchased Sodyeco Inc. in the mid-1980’s, it inherited responsibility for the mess. Clariant spent over $40 million cleaning up the site, and properly disposing of hazardous waste. In 2005, Clariant ceased production at the plant, but environmental clean up continued. As long as the site remained on the Superfund National Priorities List of hazardously polluted sites, no new tenants could make use of 30,000 square feet of industrial space and 667 acres of land.

THE DIFFICULT ROAD TO REDEVELOPMENT
Around this time, McKittrick approached Clariant with his vision for environmentally-friendly redevelopment. Clariant liked the idea, and agreed to a rent-to-own agreement with Forsite Development. Forsite began working with Clariant and the EPA to expedite the clean-up process and get the site into good enough shape to be dropped from the superfund list. At that point, the site would be eligible for brownfield status, which allows new tenants to locate on-site without taking on responsibility for the remaining contamination.

The EPA took the site off the superfund list in February 2012, and soon after that, the state certified it for brownfield redevelopment. As part of the brownfield agreement, Forsite agreed to post financial assurance (estimated to be $12.5 million) to gurantee that funds would remain for the clean-up, no matter what.

As challenging as it was to meet the demands of federal and state regulators, the plant’s neighbors proved to be McKittrick’s greatest hurdle. Forsite’s original plan for the site included a 20-megawatt waste-to-energy power plant. The site would sort through Mecklenburg County’s trash looking for recyclables and suitable biomass for the plant, and then sell the electricity to Duke Energy.

In 2010, McKittrick worked hard to make sure all the necessary partners were on board, but he had not expected local environmental groups to challenge the project. Although Forsite’s plan would have doubled Mecklenburg County’s recycling, and almost every new landfill has some kind of waste-to-energy component to harvest methane, biomass gasification is controversial and poorly understood.

Local environmental groups argued that ReVenture planned to “burn trash.” Although this phrasing obscures the difference between the smokey, bad-smelling, traditional trash incinerator and a carefully-loaded gasifier that restricts oxygen and burns methane before it can be released, the phrasing succeeded in rallying community resistance to the project. Public officials became less enthusiastic, and Duke Energy was increasingly focused on solar projects for their renewable energy portfolio. The project lost momentum, and Forsite was forced to go back to the drawing board.

ELIMINATING WASTE THROUGH INDUSTRIAL ECOLOGY
After five challenging years, McKittrick finally unveiled ReVenture Park in August. Instead of the 20-megawatt plant, he has plans for two biomass units that will generate 3.3 megawatts between them. Rather than sifting through Mecklenburg County’s trash, one unit will run on the methane generated from a landfill in Tennessee and the other will generate methane from non-recyclable wood scraps and sawdust. Only about a sixth of the available 300,000 square feet of industrial space is currently being used, but already the park demonstrates how a healthy industrial ecosystem can eliminate waste and allow symbiotic relationships to form. The nine companies currently located on site are mostly in the start-up and research and development phase, and already they are figuring out how to work together.

Entogenetics received a grant from the US Military to create a ballistic vest using spider silk from genetically modified silk-worm. These worms will eat leaves from mulberry trees grown on-site. The leftover brush can be handed over to Waste Knot Wood, a company that turns scrap wood, like non-recyclable pallets, into a fuel source for the biomass power unit. The pyrolysis process will generate excess heat, which Duckweed Ponds plans to use to heat the lake where it will try and grow duckweed as an energy source. The pyrolysis process turns sawdust into biochar, a stable form of carbon that research suggests could be an important tool in rebuilding healthy soils and sequestering carbon. Newly formed FC Organics has plans to take the biochar that the plant creates and combine it with bokashi compost from the NASCAR Hall of Fame to create a high-quality soil amendment.

ReVenture’s industrial ecology mimics the way that nature produces no such thing as “waste.” Unused byproducts are quickly incorporated into other companies production processes, preventing the kind of build-up of hazardous materials that turned the dye-manufacturing site into a Superfund site.

ReVenture Park still has plenty of room to grow, and McKittrick says he gets calls every week from other companies that want to join the eco-system. For now, he can offer start-ups affordable rent, access to industrial infrastructure and room to expand. EV Fleet, a company developing the first highway-ready, electric pickup truck is already growing quickly. The park has become a hub for the kind of green-energy jobs that will help North Carolina decrease its dependence on fossil-fuels.

WHAT LIES AHEAD
ReVenture Park is still in its embryonic stage, but it is well on its way to become one of the corner-stones of Charlottes’ clean-energy economy. Forsite is working with the Catawba River District to create a new K-20 Learning Center, where students of all ages will come and learn about sustainability, recycling and alternative energy.

Forsite has also partnered with the Catawba Lands Conservancy to create a conservation easement on 175 acres along the Catawba River. The Carolina Thread Trail will run through this land, allowing the existing trail to connect with the US National Whitewater Center. Though placing land in conservation has attractive tax benefits, it also provides important habitat for local wildlife and allows humans to reconnect with the genius of nature. McKittrick knows that the child watching a spider spin its web may grow up to pioneer a more-ecologically friendly way of producing bulletproof-vests.

With ReVenture Park finally up and running, Forsite Development has begun to turn its attention to other underutilized manufacturing sites. McKittrick admits that he has learned a great deal from the project, and going forward will probably not include controversial waste-to-energy technologies in future plans. There is plenty of industrial infrastructure out there in need of recycling, and now he has the experience he needs to repurpose them for the clean-energy, zero-waste future that North Carolina needs.