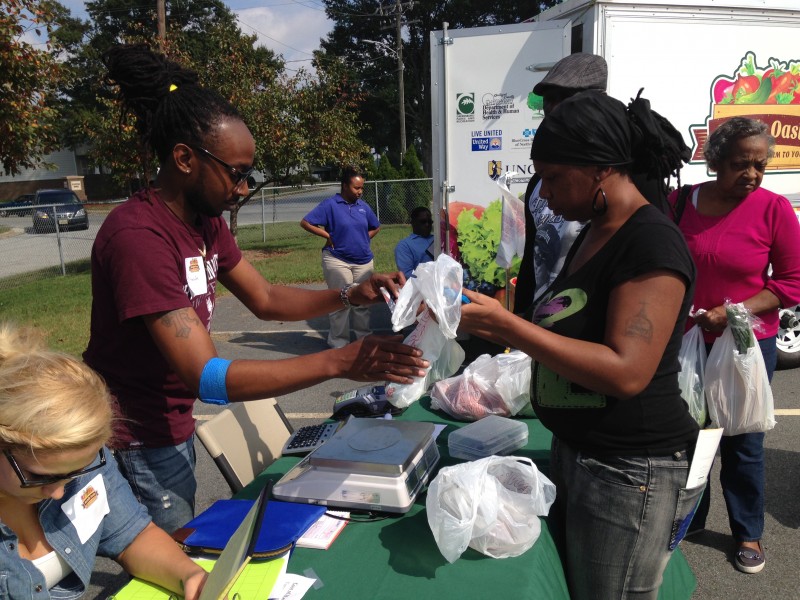 Accessing healthy food is a challenge for many Greensboro and Highpoint residents. The nearest grocery store is often miles away, a difficult trek for the many low-income families who lack access to a car. Parents are forced to choose between paying a cab fare they can’t afford, spending hours navigating public transit or grabbing dinner from the neighborhood convenience store. Convenience stores generally accept SNAP/EBT benefits, but mostly offer processed food that is low in nutritional value.

Food insecurity is a serious problem across the entire state of North Carolina, but nowhere as bad as Guilford county. A 2012 Food Hardship Report found that 23% of Greensboro-Highpoint residents reported not having enough money to buy needed food at least once in the last twelve months. The metropolitan area ranked second in the country in overall food insecurity. In 2013 the US Department of Agriculture found that 24 census tracts in Guilford county fit the official definition of a “food desert,” a place where more than a third of residents live more than a mile from a grocery store and at least 20% live under the poverty line. Unsurprisingly, these areas also have higher than average rates of food-related illnesses, like diabetes and heart disease.

In response, a number of organizations and city departments have come together to form the City Oasis Project, an effort to make healthy food more accessible to everyone living in Guilford county. The project takes a multi-pronged approach, creating pop-up farmers’ markets and community gardens and offering gardening and cooking lessons. The project eventually plans to develop urban farms in food deserts in order to provide economic opportunities and a resilient source of food security.

The project is a partnership between the Guilford County Health Department, the City of Greensboro, Greensboro Parks and Recreations, Vision Tree Community Development Corporation, Prince of Peace Lutheran Church, NC A&T and UNC Greensboro, with additional funding coming from the United Way Foundation, Blue Cross Blue Shield and Whole Foods Market. So far, much of its energy has focused on the Warnersville community, Greensboro’s oldest African American neighborhood.

Warnersville has no supermarket within a two mile radius, and has one of the highest poverty rates in the county. When Vision Tree founder, Matthew King, returned to his native Greensboro two years ago, the Prince of Peace Lutheran Church and the county had already teamed up to start a farmers market and community garden next to the church, in the middle of Warnersville. With Vision Tree’s help, the garden continued to grow and the farmers’ market was put on wheels.

Bringing good food to the people

This past October, the City Oasis Project launched a pilot Mobile Oasis Farmers’ Market to bring fresh produce to the communities that have the most trouble accessing it. United Way funded the trailer, and the city provided the truck to pull it. Vision Tree became certified to accept EBT/SNAP benefits, and took care of most of the market’s operations.

Every Wednesday of October and November, the mobile market set up shop at Greensboro’s Department of Social Services and Warnersville Recreation Center. The market offered produce from a local farmer, and customers also had a chance to learn new recipes from on-site cooking demonstrations.

In two months of operation, the mobile market managed to sell 1500 lbs. of produce to almost 500 customers. It will start up again next spring, and will make more stops on different days of the week. This coming year, more of the produce will come directly from the Warnersville Community Garden.

Food security is less of an issue in communities where people are growing food for themselves. Many people who live in places classified as “food deserts” have used backyard gardens as a source of fresh food for generations, but not everyone remembers how to garden.

King is passionate about growing food right in the heart of food-insecure neighborhoods. Vision Tree, along with Prince of Peace and other City Oasis partners, have worked to expand the productive capacity of the garden in Warnersville. They will be putting in a couple of high tunnels over the winter to help them extend their season and give them more growing space.

King wants to see the Warnersville garden demonstrate the best urban agricultural practices from across the county. He’s working closely with NC A&T’s Horticulture department on plans to add an aquaponic greenhouse and larger composting facility to the site. People will be able to come to the site to learn how to grow food for themselves.

The long-term goal is to have the produce available at the mobile market coming from the community garden right down the road. Instead of addressing food access in isolation, this approach addresses the lack of jobs and economic opportunities that underly food insecurity. King explains, “If you give a dollar to McDonald’s, you’ll never see that dollar again. When you spend that dollar on produce from a local farmer, it stays in the community and recirculates, creating an economic multiplier.”

Without ways of keeping money local, the money that does come into low-income neighborhoods goes right back out, into the pockets of large corporations that do not employ anyone locally. Supporting local producers helps create a local system of exchange, building community wealth that benefits everyone in the neighborhood. King hopes that the Warnersville garden will eventually bring in enough revenue from produce sales to create 2-3 jobs managing the site, though it will continue to rely on volunteers and donations in the near term.