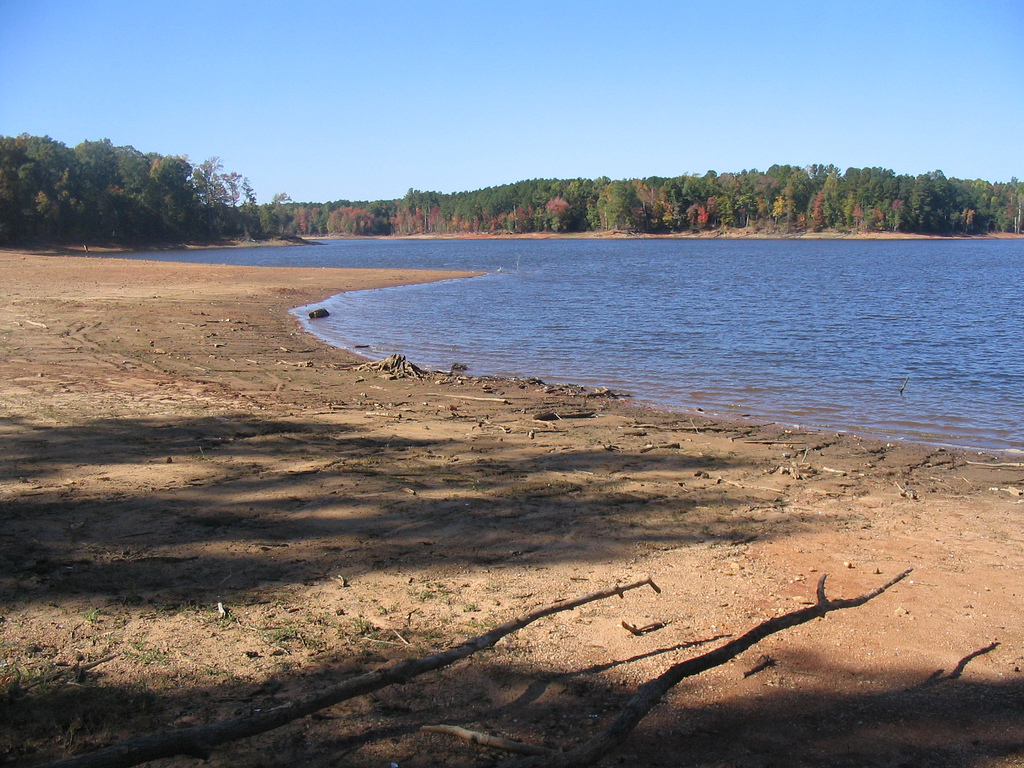 The western United States is parched. California is now in the fourth year of a severe drought. The Sierra Nevada mountains have less than a tenth of the snow they usually have at this time. In normal years, this snowpack provides a third of the water that California uses during summer and fall. For the first time in the state’s history, Governor Jerry Brown has ordered a mandatory 25 percent statewide reduction in urban water use. Farmers and rural residents have already seen their water supplies cut back, and Brown has indicated that further agricultural water use restrictions may be necessary. Out of necessity, Californians are learning how to farm and live with much less water. Part two of this article describes some of the innovations that have emerged from the drought.

California produces more than one-third of the nation’s vegetables, nearly two-thirds of its fruits and nuts and six percent of its beef. Already, the state’s severe drought has caused food prices to rise significantly. California’s position as an agricultural powerhouse ensures that the rest of the world pays attention when the rain and snow fails to fall, but it is hardly the only state in the nation facing scarce water supplies. Aquifers under Washington state, the Great Plains, and West Texas are all showing signs of depletion.

The Colorado River provides water to 40 million people in seven states, plus northern Mexico. The river basin has been in a drought for fifteen years now, with many reservoirs less than half full. Surrounding states are legally entitled to more water than the river has to offer, which will soon force the region to revisit how the river water is divvied up. New climate change projections predict that the likelihood of a severe mega-drought in the southwestern US will increase from 12 percent to 80 percent by the end of the century. Rapidly growing cities like Phoenix and Tuscon will need to figure out how to support larger populations with less water.

The struggle for water resources in the US is part of a global trend. Conflicts over water are not new to human history, but growing populations, the push for industrialization and climate change are making them a more frequent occurrence. In 1995, World Bank Vice President Ismali Serageldin famously said, “If the wars of this century were fought over oil, the wars of the next century will be fought over water, unless we change our approach to managing this precious and vital resource.”

Although the southeast is fortunate to be well saturated with water at the moment, the Tarheel state is no stranger to water scarcity and the conflicts that ensue. Despite being a relatively water-rich state, we have experienced two extremely severe droughts in the last two decades, first between 1998 and 2000 and again in 2007. In both cases, surface water sources hit historic lows and many municipalities were just weeks away from depleting their reservoirs.

North Carolina is home to some of the fastest growing metropolitan areas in the country. A report from the General Assemblies Environmental Review Commission acknowledges that population pressure will likely lead to conflicts over water in the next thirty years. Unlike western states, where regional water authorities manage shared water supplies, in North Carolina, each municipality must secure its own water supply. During droughts, municipalities with insufficient water resources are forced to pay high prices to pipe in water from neighbors with reservoirs.

Spurred by growing populations, Charlotte and parts of the Research Triangle are already taking so much water from nearby rivers that downstream neighbors are starting to complain. The amount of water flowing into Falls Lake, Raleigh’s primary water source, has decreased by 1-2% per year for much of the past century. During the 2007 drought, Falls Lake came close to drying up. By 2040, demand is set to outpace supply. The city is working with the Army Corps of Engineers on ways of safely withdrawing more water from the lake, but doing so would leave less for downstream neighbors in Johnston County and could damage the river’s ecosystem.

Cary, Apex, Morrisville and Wake County recently secured the right to pump an additional 9 million gallons a day from Jordan Lake, bringing the total allowance to 33 million gallons per day. Jordan Lake feeds the Cape Fear River, but most of the water Triangle residents use will be discharged into the Neuse River Basin. Fayetteville’s municipal utility is worried that this will not leave enough water in the river for the many cities and counties that rely on the Cape Fear River for their own water supply.

Conflicts over water take place both within and between states. North Carolina has already gone to court with Virginia and South Carolina over the right to pump surface water. When Virginia Beach proposed building a pipeline from Lake Gaskin, a tributary of the Roanoke River, residents of northeastern North Carolina was furious. The state spent fifteen years challenging the pipeline in court, before finally conceding. Today, the pipeline takes 60 million gallons of water out of the Roanoke a day.

On the southern border, use of the water in the Catawba River is an ongoing source of tension between North and South Carolina. More than 30 cities and 17 counties rely on the North Carolina portion of the river for industry and drinking. South Carolina sued in 2007 when North Carolina officials approved inter-basin transfers of an additional 10 million gallons per day for two Charlotte suburbs. The states settled out of court in 2011, giving South Carolina more of a say in future withdrawals from the Catawba.

In rural areas, households are left to fend for themselves, digging wells into shallow groundwater basins. Though a well feels like a private supply of water, water is never really private. A recent report from the United States Geological Survey emphasizes that groundwater and surface water should be thought of as a single resource.

The quality and quantity of water in a well is always linked to activities on neighboring properties. Neighbors putting down impervious surfaces, like asphalt, gives aquifers less opportunity to recharge. If a neighbor puts in a deeper, more powerful well than yours, there is the potential for your neighbor to pump so much water that your well runs dry. In California, the drought has lead to a massive influx of new wells being dug in the San Joaquin Valley. The water table and the land itself is sinking, and existing wells are drying up.

During the 2007 drought, otherwise reliable wells failed across the state, forcing rural residents to purchase water. Even in times of abundant water, neighbors drilling deeper, more powerful wells can cause existing wells to dry up. In 2010, residents of the Norwood Oaks community north of Raleigh all had their wells fail at the same time. Aqua North Carolina, the largest public water company in the state, has three community wells within 2,000 feet. The president of Aqua suggested that residents should become Aqua NC customers. Privately owned water utilities have proliferated across the state in recent years.

Since the western two-thirds of the state relies primarily on surface and shallow groundwater, contamination is a major issue. Charlotte pumps its municipal water from Mountain Island Lake, which is in close proximity to a number of Duke Energy’s coal ash ponds. Studies have shown that these coal ash ponds are responsible for high levels of arsenic in the lake.

With so many municipal water supplies coming from rivers and lakes, runoff from urban areas and farms can become a serious cause for concern. Some municipalities have had to fight hard to protect their drinking water from potential contaminants upstream. The city of Wilson’s water comes from the reservoir the city built on the Toisnot River. Sanderson Farms proposed a chicken slaughterhouse that would have disposed with wastewater into tributaries of the Toisnot, but Wilson joined with other communities along the Neuse River to block the project.

North Carolina ranks second in both hog and chicken production in the country. Keeping these animals’ fecal matter from contaminating surface and groundwater supplies is no easy task. Beyond adding enough nitrogen and phosphorous to disrupt natural ecosystems, waste from industrial meat operations can also contain dangerous pathogens. Researchers have found a high concentration of dangerous compounds, including antibiotic resistant bacteria in ground and surface waters near hog farms. New research suggests that bacteria can pass antibiotic resistent genes across species. With faulty storage, or in an extreme weather event like a hurricane, the resistence that on-farm bacteria have to antibiotics could find their way to other species of bacteria that live in our wells and rivers.

And animal waste isn’t the only thing to worry about. Last year, a power outage at a sewage treatment plant resulted in 73,000 gallons of partially-treated sewage flowing into a tributary of Charlotte’s water supply. Faulty septics and burst pipes are an all too common occurrence, allowing raw sewage to seep into ground water and eventually into rivers that provide drinking water to people downstream.

Much of the coastal region is fortunate to sit on top of the Castle Hayne-Aquia and Peedee-Upper Cape Fear aquifers, however, this comes with its own set of concerns. Already there are reports of saltwater intrusion into these freshwater aquifers, making farming challenging in some otherwise fertile parts of the state. Rising sea levels and more frequent flooding will likely exacerbate the problem.

Water in the aquifers generally becomes more sodium and mineral rich as it gets closer to the coast. However, when wells take up millions of gallons of water a day, it leads to backflows that can bring sodium and minerals further inland. North Carolina currently pumps far more water out of these aquifers than other states for use in mining, industrial and thermoelectric power purposes. PCS Phosphate currently has a permit to pump 78 million gallons of water out of the Castle Hayne aquifer each day, and Judge Phil Berger Jr. just approved Martin Marietta Minerals Inc. request to pump 12 million gallons a day and discharge it into Blout Creek. Environmental groups plan to appeal on the grounds that it violates the Clean Water Act since the discharge will destroy the fragile brackish water ecosystem in the creek.

With increased competition for inland freshwater flows and sodium and mineral-rich water creeping further west, many North Carolina coastal communities are forced to rely on costly desalination plants. There are already 12 desalination plants in North Carolina, but critics say these plants are incredibly energy intensive to run, and the briny discharge may damage coastal ecosystems.

Across the state, water is quickly becoming a precious resource that cannot afford to be wasted. We are fortunate to not have mandatory water restrictions in place right now, but we have in the past and will again in the future. The drought out west is changing how cities and farms use water. These innovations will inevitably migrate east as population pressure and future droughts make access to clean drinking water a serious problem.

In part two of this article, we will examine some of the innovations that have emerged from the West’s lack of water.