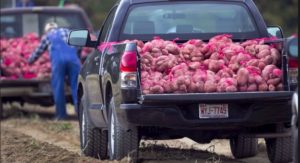 Giving Tuesday, which celebrates charitable action and the spirit of generosity, is an apt moment to highlight the social mission of a farm business in Louisburg, NC, where the first crops of every harvest go to those in need.

Farming is a second career for First Fruits owner Jason Brown, a former Tarheel and St. Louis Rams lineman. Brown walked away from the NFL in 2012, inspired by faith to pursue his dream of feeding the hungry. This year the farm gave its entire sweet potato harvest—more than 100,000 pounds—to local food pantries and food access organizations.

After purchasing a 1,000 acre tract of land in Franklin County, Brown started watching Youtube videos to learn how to farm, he said in a recent CBS interview. Since then, Brown has benefited from the advice of local farmers. He also received a donation of sweet potato slips from a Nashville farm supply business that learned about the farm’s mission.

Normally, gleaning involves collecting what has been missed or discarded after a crop has been picked. Brown inverted this concept by inviting gleaning groups from the Society of Saint Andrews and the Interfaith Food Shuttle to gather the entire yield. He gave away a summer crop of cucumbers in this way, in addition to all of this fall’s sweet potatoes.

As many as 200 volunteers and 13 trucks turned out to one of the November harvest days, according to the News and Observer. The sweet potatoes were then distributed to food pantries and shelters in Durham, Wake Forest, Oxford, Warrenton, Granville County, Knightale, Garner, Henderson, and Raleigh.

Brown has said he intends to grow—and donate—more next year.