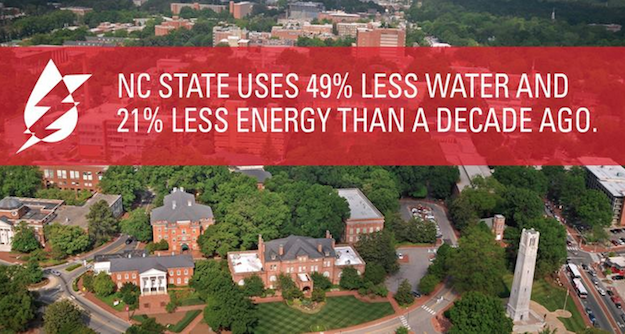 Doing more with less is one of the central tennets of sustainability. At NC State University, they appear to have taken that principle to heart. Not only has NCSU’s Lonnie Poole Golf Course been held up as a beacon of sustainability in the sport, but the whole university has been on a mission to slash its water and energy use dramatically. And they appear to be succeeding:

With yet another year of energy conservation success in fiscal year 2012-2013, NC State University has reduced campus energy use by 21 percent and water use by 49 percent in the last decade.

This progress moves the university closer to its 2015 goal of using 30 percent less energy than campus used in 2003 and within easy reach of its goal to cut 2002 water consumption in half by 2015.