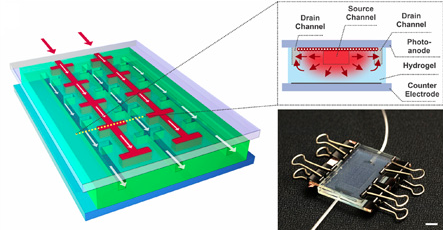 Solar power is an increasingly important part of most countries’ energy mix. But solar cells degenerate over time, losing their capacity to create power in the process.

Now researchers at NC State have developed a self-healing solar cell, which mimics nature to fight the deterioration process:

In a new paper, North Carolina State University researchers Orlin Velev and Hyung-Jun Koo show that creating solar cell devices with channels that mimic organic vascular systems can effectively reinvigorate solar cells whose performance deteriorates due to degradation by the sun’s ultraviolet rays. Solar cells that are based on organic systems hold the potential to be less expensive and more environmentally friendly than silicon-based solar cells, the current industry standard.

The nature-mimicking devices are a type of dye-sensitized solar cells (DSSCs), composed of a water-based gel core, electrodes, and inexpensive, light-sensitive, organic dye molecules that capture light and generate electric current. However, the dye molecules that get “excited” by the sun’s rays to produce electricity eventually degrade and lose efficiency, Velev says, and thus need to be replenished to reboot the device’s effectiveness in harnessing the power of the sun.

“Organic material in DSSCs tends to degrade, so we looked to nature to solve the problem,” Velev said. “We considered how the branched network in a leaf maintains water and nutrient levels throughout the leaf. Our microchannel solar cell design works in a similar way. Photovoltaic cells rendered ineffective by high intensities of ultraviolet rays were regenerated by pumping fresh dye into the channels while cycling the exhausted dye out of the cell. This process restores the device’s effectiveness in producing electricity over multiple cycles.”

News of the design was picked up by clean energy enthusiasts across the internet, including leading renewables blog CleanTechnica.