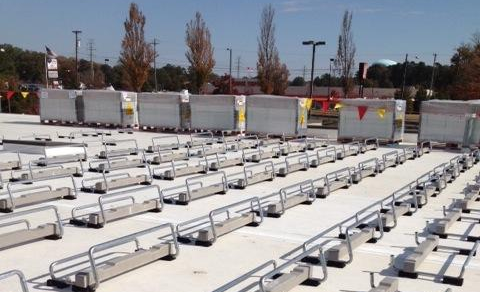 Solar power is taking off in a big way in North Carolina. Now Habitat Charlotte, which has already made a strong commitment to green building, is getting in on the act. Charlotte Business Journal reports that the non-profit is installing 550 photovoltaic panels on its roof in an effort to cut carbon emissions and reduce its reliance on the energy grid:

The solar panels are expected to generate 137,500 kilowatt-hours annually. Work started this week, says Habitat Charlotte spokesman Phil Prince. A private investor is underwriting the project. Habitat Charlotte’s main office is on 3815 Latrobe Drive, off Wendover Road, and is adjacent to its Julia’s Café & Books and ReStore retail shops.

The nonprofit celebrated its 30th anniversary this year. Its homebuilding and repair programs have contributed an estimated $500 million total economic impact to the community during the past three decades, according to a UNC Charlotte study.

Head over to the Charlotte Business Journal for the full scoop on this important clean energy project.