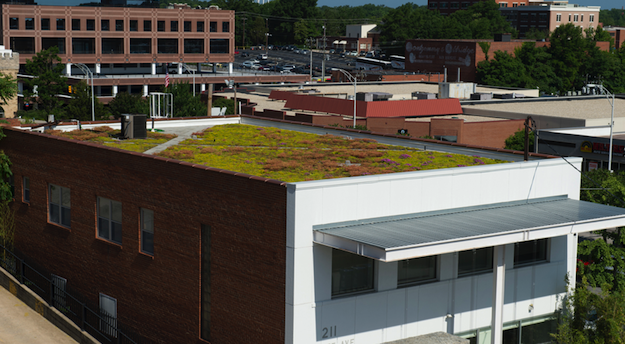 Green roofs are an increasingly popular feature on new sustainably designed and built structures – managing storm water, reducing air conditioning needs and promoting biodiversity in the process. Because of the additional weight, putting a green roof on an existing building, however, can be challenging – especially in a designated historic district.

Xero Flor America, founded in 2002, is a major player in the national green roof industry operating from the newly renovated Republik Building at 211 Rigsbee Avenue in downtown Durham’s historic district. The building has a 2,343 square foot Xero Flor green roof, the first of its kind in the district and a bit of confirmation that green roofs on historic buildings and retrofits can be a reality.

Xero Flor America is the exclusive US distributor of the Xero Flor Green Roof System. The system uses pre-vegetated mat technology that was engineered in Germany. All of the system components used in the States are American made, and the vegetation is grown across the country by independent farms.

Xero Flor has been installed in 38 states since 2002. The largest green roof on a freestanding building in North America, at 454,000 square feet, is a Xero Flor green roof system installed on top of the Ford Dearborn Truck Plant in Michigan. You can also find Xero Flor green roofs in New York on the Empire State Building, Columbia University, and even an affordable housing project in Milwaukee.

But what do green roofs do, why should we be excited? According to David Aquilina, Xero Flor’s media contact, green roofs can: help manage stormwater, improve water quality, conserve energy, mitigate the urban heat island, sequester carbon, deliver longer roof lives, and enhance property value. Green roofs function like a sponge that – reduces the velocity and volume of runoff, filters pollutants out of rainwater and particulates out of air, provides shade and insulates rooftops, acts as a natural evaporative cooling system, shields conventional roofing components, provides habitat, and reduces sound levels.

The benefits are real. For example, the green roof at 211 Rigsbee Avenue in Durham has the potential to prevent 50,000 gallons of runoff annually. Further, if just 25 percent of the rooftops in downtown Durham were “green,” runoff could be reduced by about 20 percent, according to Peter Raabe at American Rivers.

To learn more about the Xero Flor system visit Xeroflora.com