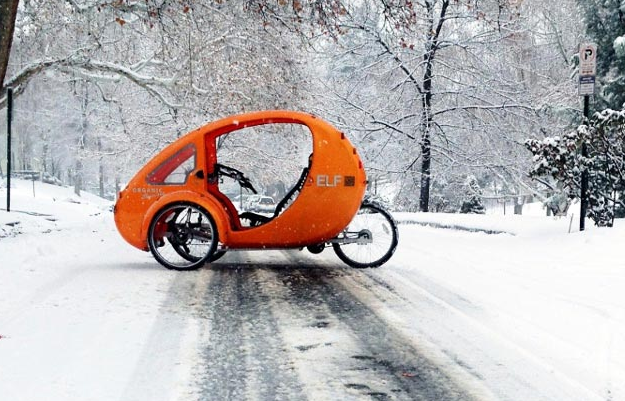 “I saw three ELFs on the way to work this morning, honey.”

That’s the kind of statement that tends to get you funny looks from your significant other. But it’s exactly what happened for this author, driving between Watts Hillandale and downtown Durham. The ELF solar pedal hybrid vehicle, made by Durham-based Organic Transit, has become a familiar sight on Durham streets. Offering the work out and environmental benefits of a bicycle with the weather protection, cargo capacity and convenience of a car, the ELF is aimed at getting urban commuters out of their cars.

Designed by Rob Cotter, a long-term veteran of the automotive industry, the ELF offers an all weather shell, high visibility in traffic, electric assist for powering up hills or simply coasting to work without breaking a sweat, and space for about 8 bags of groceries. Having test-driven one for a feature for Mother Nature Network some time back, I can attest to both the ease of use and the shear pleasure of piloting one of these odd looking vehicles, which really do feel like a bike for people who don’t want to ride bikes. Here’s how Rob Cotter describes the appeal:

“The bike industry is huge in the U.S., but it is largely geared toward recreation and sport. We know there are vast numbers of people who would be interested in biking, but they are concerned about safety, convenience, or they simply don’t want to turn up to work in sweaty Lycra. If we can get a fraction of that market, we’ll be home dry.”

As my recent morning commute shows, the ELF is already hitting the streets. One of our NCSC board members owns one and gives positive reports of riding it around town, and the vehicle has gotten press in outlets ranging from the Wall Street Journal to TechCrunch and CNET. Speaking with Rob Cotter recently, he seems confident that the ELF is already having a big impact – with even bigger things to come:

“We’ve got 325 of these things on the road right now. And we’ve figured out that if someone is actively riding it – say about a 1000 miles a month – which many of our owners do, thats the equivalent of removing 6 tons of CO2 from the atmosphere a year. We’re looking at getting about 1,200 on the road in the next year. That’s a pretty significant impact for a small company like ours.”