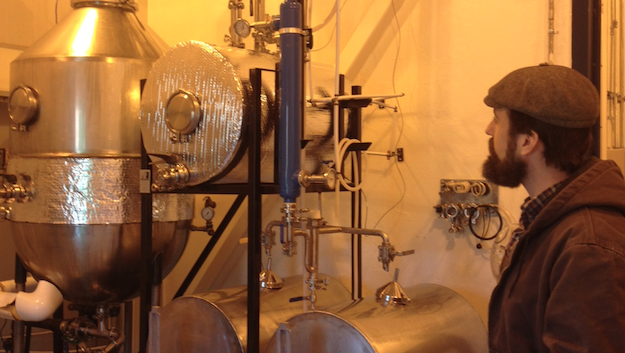 Craft distilling is a growing industry across the US, and North Carolina is now exception. While early craft distilleries here focused on the state’s heritage of moonshine production – albeit a more legal version than previous generations – but increased competition is leading to a broader selection of NC-distilled spirits, including some with a strong focus on sustainability and the local supply chain.

“The spirits we’re focusing on are not the typical ones folks usually start out with. We’re committed to making spirits from North Carolina fruits including grapes, apples, peaches, and we’re using Chatham County sweet sorghum to make our sorghum cane spirit.”

“We often assume everyone is about sustainability, but they’re not. Topo Distillery in Chapel Hill is all about local and organic, but while most craft distilleries are certainly focused on quality, sustainability is less of a concern.”

A challenging regulatory environment
Starting a locally-focused distillery from scratch in NC is not easy, says Jude, due to the state’s liquor laws:

But there are strengths to the craft distilling trend. Jude and Schwerin believe that small is the new big.

“We want to stay small; we don’t want to be huge. Small is the new big,” Schwerin explains. “In a lot of senses we’re tiny. As far as apples go, there are so many apples out there in Henderson County. For example, our one year’s production was about half a day’s pressing for them.”

Smallness as a competitive advantage
Jude agrees that staying small is central to maintaining a focus on both quality and a localized supply chain:

“Smallness is something that’s nice about our business. You talk to lots of NC distillers and they want to get really big. I just want to get really good. You can make money and not be a giant. There is just bound to be a loss of quality when you get so large.”

Building long-term partnerships
As Jude has gone through the process of starting the distillery, he says “we’ve done really well connecting with local growers. That’s one of the main ways to be sustainable with a distillery.” For Jude and Schwerin, it is about being connected to the producer and grower. As Schwerin explains:

“For us, every step is consciously thought through…where we get the labels, where the bottle comes from…the origins really matter. We’re working with “Made in USA” suppliers for bottles and packaging. You can definitely go to Asia for bottles and whatnot, but that’s not something we’re interested in doing”

“Our feed stocks are native NC fruits,” explains Jude. “Apples grow easily in western North Carolina, but orcharding is still fairly new in the Piedmont. David Vernon from Century Farm Orchards in Edenton grows over 500 varieties of heirloom apples for the South.”

Developing native feedstocks
Devil’s Distillery hopes to work with Vernon to get apples that are good for cider and good for warmer climates. “It’s our goal to have someone associated with the distillery growing apple trees for us,” says Jude.

“The base fruit for our brandy is the scuppernong grape, which is very weather and disease resistant. In terms of sustainability it’s a plant that can do well in NC,” he adds.

“Also, in terms of sustainability, a distillery, as we’re operating it, is part of the agriculture food shed. We’re taking seconds from the farmers. We ferment the juice from later run apples; the bruised, not so pretty fruit. We take the excess wine from the wineries. We fit in there and allow the farmers to get a secondary market from their products. We’re preserving the income for the farmer. We’re preserving the value.”