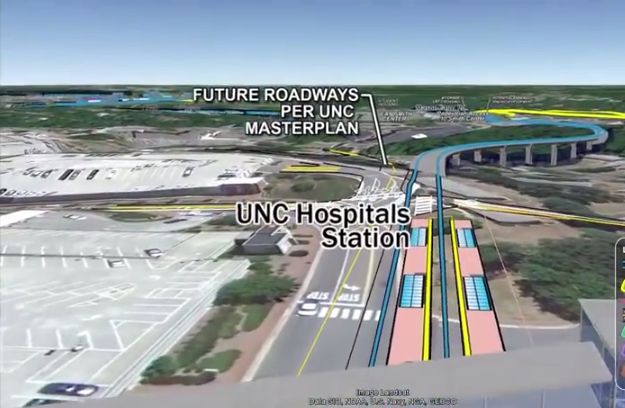 The Chapel hill-Durham Light Rail project, which we reported on earlier this year, has just received a first-step approval from the Federal Transit Administration to begin planning the 17 mile route. Below is the full press release from Triangle Transit detailing the significance of this decision:

“We are pleased with FTA’s decision,” said Fred Day IV, Chair of the Triangle Transit Board of Trustees. “This represents an important milestone in the course of this project.”

Triangle Transit General Manager David King said, “We can now proceed to complete the environmental process, advance our engineering and make final alignment decisions. We will also use this time to strengthen our financial plan and work with our municipal and university partners on land use and housing issues around stations. We appreciate FTA’s vote of confidence in our work on this project.”

The Project Development phase is scheduled to take two years. Project Development is followed by a three year phase called engineering. Construction would follow the engineering phase and would likely take four to five years before light rail service could begin. More information is available at ourtransitfuture.com.

The project cost is estimated at $1.34 billion dollars (in 2012 dollars). Voters in Durham and Orange counties have approved a one-half cent sales tax to fund the local share of the rail project along with new and expanded bus service.

King added, “We want to thank our legislative delegation in Washington, especially Congressman David Price for his longstanding support of transit in the Triangle.