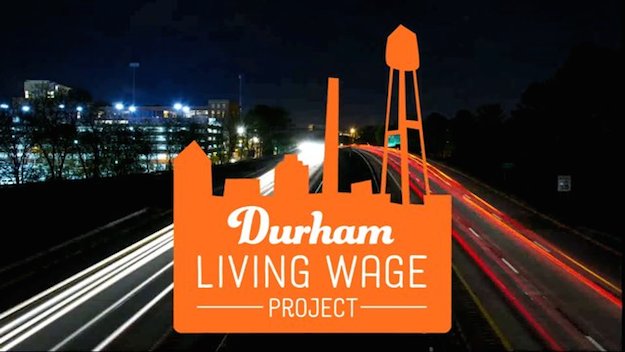 From high speed fiber broadband to the proposed Durham-Orange County light rail, there are signs that Durham’s economy is on a major upswing. Many in the community, however, still struggle to get by on low and stagnant wages, and a new voluntary certification scheme is hoping to change that—providing recognition for employers who pay a true living wage and, organizers hope, creating market demand for more businesses to raise their pay.

Durham Living Wage launched this month at a packed meeting of the Durham People’s Alliance at Fullsteam Brewery in downtown Durham. It is modeled after the successful Living Wage Certification Program in Asheville, which certifies 280 businesses and is considered to be one of the largest programs of its kind in the nation. To qualify for certification, businesses must pay individuals at least $12.33 an hour without insurance or $10.83 an hour with insurance. Independent contractors have to be paid at least $14.33 an hour.

Durham Living Wage is currently running a crowdfunding campaign to raise $20,000 so that it can employ a project coordinator and turn this all-volunteer scheme into a sustainable, long-term operation.