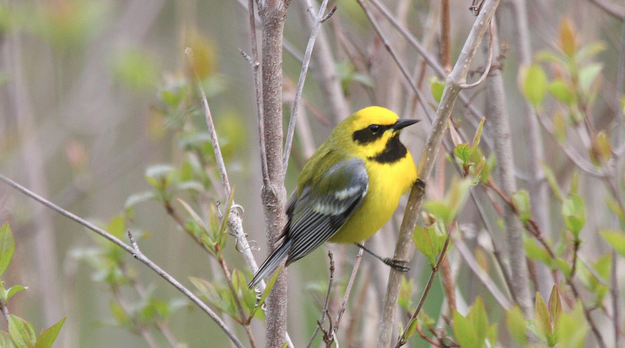 Too often, the relationship between conservationists and private landowners is framed as one of conflict.

Yet landowners often have both an ethical and an economic intense interest in protecting the resources on their property, and conservationists have an interest in finding common ground – ensuring that their recommendations are actually implemented.

A new initiative from Audubon NC hopes to capitalize on this shared interest, working with 77 major private landowners in Western North Carolina in an effort to protect and improve habitat for the golden winged warbler, which has seen its numbers rapidly decline in recent years. The trick, says Audubon, is not just to create dedicated nature reserves and bird sanctuaries, but rather to influence the management of farms, ranches and timber forests too to create much larger areas of habitat for important species. Here’s how Audubon Conservation Biologist Erin McCombs described the initiative to the High Country Press:

“As the bird people for our state, ANC has crafted an approach to forest management that protects and restores habitats for birds, while simultaneously helping landowners enhance their property in cost-effective ways. We are excited to develop these partnerships with local communities and their citizens across Western North Carolina in an effort to sustain the Golden-winged Warbler and North Carolina’s beautiful landscapes.”

The effort is part of a national Audubon initiative entitled Putting Working Lands to Work for People and Birds, which is aiming reach out to the landowners or public land managers of 5 million acres within the most important forested areas in the eastern United States by 2016.